A Day in the Life: Owensboro Fire Department

What 5 year old doesn’t dream of being a firefighter? My mom still tells the story of the time I set a Kleenex on fire in the bathroom sink so I could put it out with my little red Fisher Price fire truck with working water pump hose. (I do NOT recommend that!)

We imagine what it would be like to be the hero, ride on that big ladder truck, put out fires, and rescue people in distress. It makes for great action movies and TV shows too. But unless there’s a firefighter in your family, it’s hard to get a true picture of what being a fireman is really like.
Owensboro Living visited Fire Station #2 to talk to the guys about a day in the life at the Owensboro Fire Department.

[tw-divider]Logistics[/tw-divider]
There are five fire stations in Owensboro. Station #1 on Locust Street is the biggest since it’s considered the base of the operation and it’s closer to downtown. It houses an engine company, a ladder crew, and a rescue crew, so at any given time there are about 12 firemen on duty. The other four stations are located in different sections of town and have four firemen on duty. Station #5 also has a ladder truck, so there’s an extra driver on duty at #5 as well.

Altogether, the Owensboro Fire Department has around 90 firefighters. Their work schedule is 24 hours “on” and 48 hours “off,” meaning they clock in at 7am, are on duty a full 24 hours, then clock out when the next crew shows up at 7am the next morning. With a schedule like that it can be difficult to keep track of what day of the week it is. “Life becomes 1,2,3 work… 1,2,3 work… in your head” explains Lieutenant Chris Flake. “Sometimes you have to really stop and think about what day it is.”

[tw-divider]A Typical Day [/tw-divider]
There is a routine to the work day, though. One of the misperceptions people have is that firefighters get to just hang out and wait for the alarm to ring, but that’s not how it is at all. Their shift starts at 7am with equipment check, inventory, and cleaning the station. Next they have 2-3 hours of training which is led by the Lieutenant on duty. After lunch break, they do inspections, which they say is all part of being “ready” and staying in shape. If there is any down-time, there is a weight room where they can work out or a living room with a couch and TV. But all of that is subject to change, of course, because they could get called out on a run at any second. 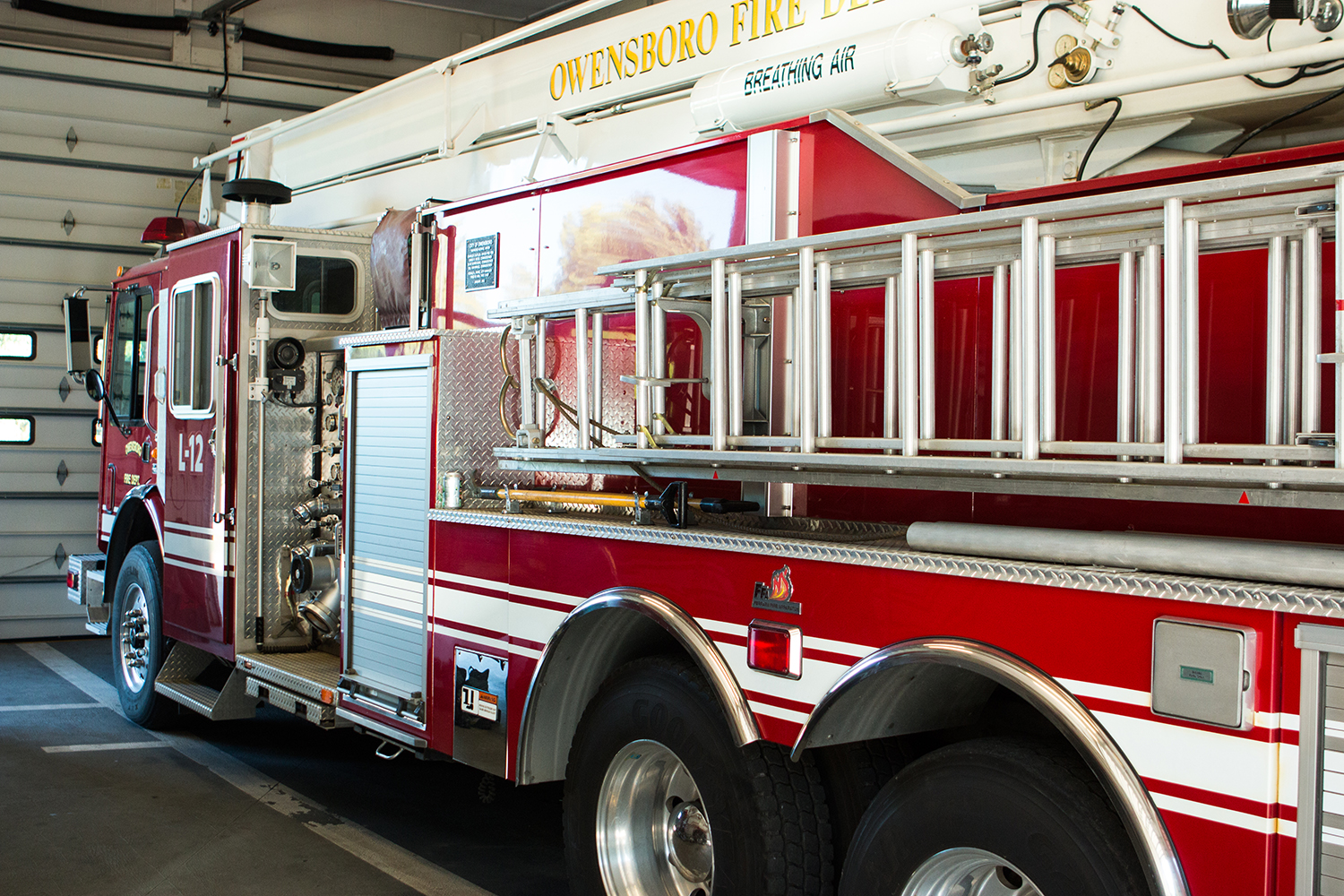 “We average 3-5 runs a day,” Flake said. “But on a busy day it might be 5-10.” Flake, being Lieutenant, is responsible for filing a run report after each run. Flake also says there are very few actual fires; 90% of those runs are first responder medical runs, meaning they are first on the scene and stay with the person until the ambulance arrives.

[tw-divider]The Good Stuff[/tw-divider]
When I asked what the best part of being a firefighter was, Rob Harris answered immediately, “Putting out fires!” He meant more than dousing flames, though. The most rewarding part is rescuing someone, which thankfully is a rarity because there aren’t that many fires. But saving a family’s prized possessions and irreplaceable items ranks very high on that list as well. Those are the moments that make all the stress worthwhile for firefighters.

The flip side of that coin is having to see the darker side of things, like making medical runs for kids or abuse victims.

But through the good and the bad, they say their shared experiences bond them together, which feels more like a brotherhood than co-workers in an office might have. “I depend on these guys with my life sometimes,” Flake said. “We live together and work together, so it becomes just like a family dynamic. There are disagreements sometimes, but we work it out.”

[tw-divider]Requirements: [/tw-divider]
So what does it take to be a firefighter for OFD? According to the application, you must be 21 before being sworn in and have a high school diploma or GED plus 60 hours of college credit; or 2 years of active military duty; or 6 years of volunteer firefighting service. Heath Divine explained, “They set it up that way because you have to have life experience. This is a hands-on job. You can’t learn to put a fire out by reading a book.” Once they’re hired, firemen rely on inspections, drills, and on-going training to keep themselves mentally and physically ready. 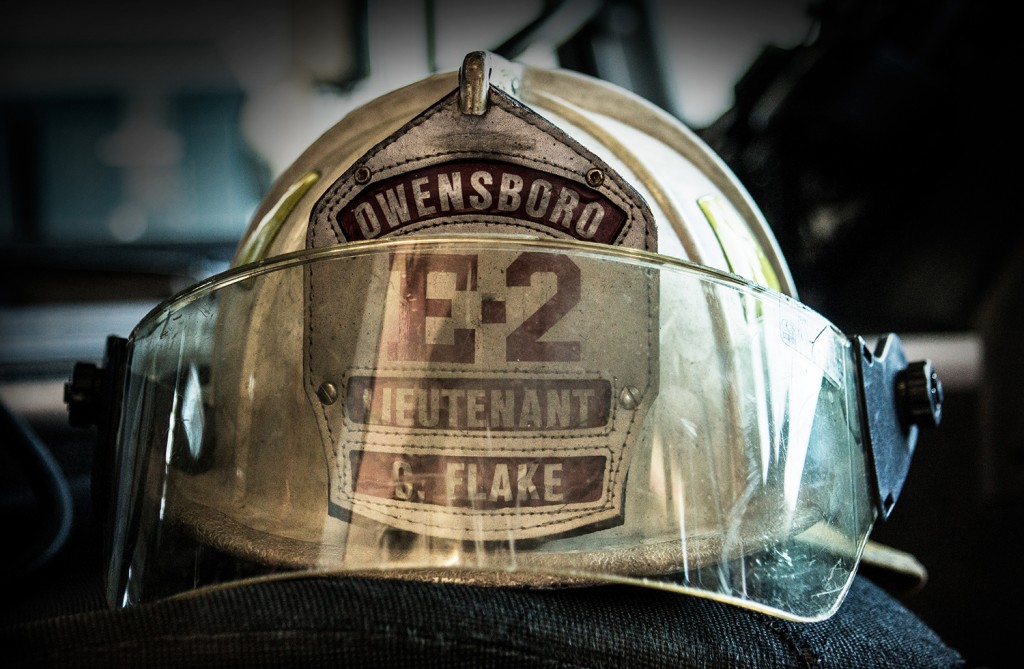 After spending a little time at station #2, it’s clear that these firefighters are a dedicated group of men who are focused on their jobs and staying on top of their game. They have to be. When that alarm bell rings they’re expected to be on the truck with their gear on in under two minutes. It’s an extreme job with average pay, which leads me to believe that these men truly love what they do or they wouldn’t make that sacrifice.

It may not be exactly like we see in the movies after all, but a day in the life of an Owensboro firefighter definitely comes with its share of challenges and rewards. Unpredictable as it may be for them, one thing the rest of us can know for sure is that we are well covered with these guys at the ready.