It’s the crack of the ball off a wooden bat. It’s the way the green in the outfield and the dirt in the infield contrast with the bright uniforms. It’s the sun in your eyes, a warm breeze blowing, and the smell of popcorn. And there’s nothing like a ballpark hotdog.

There are lots of things that make baseball America’s favorite past time, but if you ask Owensboro Oilers Owner, Charlie Pierce, and his trusty sidekick, Glen Snow, the best thing about going to a baseball game is making family memories.

“When I was a kid, being at the ballpark – life didn’t get any better!” Pierce said, recalling childhood memories of watching baseball games with his father back in the days when Cokes only cost a nickel. Pierce started playing as soon as he was old enough to swing a bat. By his high school years, he sometimes played in three leagues at one time. “It meant so much to me then that I want a chance now to help other young people enjoy the game like I did,” Pierce recalled.

It’s those types of memories, and that type of nostalgia, that Pierce and Snow hope citizens of Owensboro/Daviess County will embrace by coming out to support the Owensboro Oilers at their home games this summer at Chautauqua Park.

History of the Professional Oilers

The Owensboro Oilers name has quite a legacy. The Oilers began as a Kit League (Kentucky, Indiana, Tennessee) Class D professional league from 1936 – 1955.

As Pierce tells it, an oil man by the name of Mr. Miller (hence the name, Owensboro Oilers) built a field where Gabes Tower now stands.

In those days, all professional players started in Class D. The Owensboro Museum of Science and History has a large team photo on display. The Daviess County Public Library has photo albums full of memories from those days.

After the team disbanded, the brand was lost to history.

Fast forward to 2006, when Charlie Pierce saw an opportunity to revive the brand for a collegiate team that was forming. Since no one was using the name “Owensboro Oilers,” Pierce licensed the name and the Owensboro Oilers were back on the field

The collegiate version of the Oilers joined the Kitty League, which was started in Paducah. Collegiate leagues are gaining popularity with college players because it allows them to spend the summer developing their skills against other players.

It’s also a way to get scouted, since collegiate summer leagues play with wooden bats similar to bats the pros use, rather than composite bats like college teams use. “Theoretically, a pro scout could project how a player might do in the Major Leagues a little more accurately based on performance in a wooden bat league versus a college team,” Pierce explained.

The Kitty league started with four teams: Fulton, Kentucky; Union City, Tennessee; Farmington, Missouri; and Cape Gireardieu, Missouri. The Oilers joined to make a fifth team. Then Mackenzie, Tennessee made six. That was April of 2006 and the first games were scheduled for June.

To pull together a team that fast, Pierce turned to Kentucky Wesleyan coaches to help fill a roster. The Mike Horn Foundation sponsored the team, which allowed them to buy the franchise rights and uniforms.

That first year, Owensboro won the league championship right out of the gate. One advantage might have been the fact that Wesleyan was playing in a wooden bat conference. “What we did was invite some of the best players from all the teams in Wesleyan’s conference, and several of those guys played for us,” Pierce said.

The league has since changed from the Kitty league to the Ohio Valley Summer Collegiate League (OVL), which now has seven teams, all of which are from western Kentucky except for Dubois County, Indiana.

The OVCL is one of 35 similar leagues across the United States.

Pierce says there’s no shortage of talent. “Each college team has between 35-50 players, and most of them want to play somewhere during the summer.” Many of those college athletes want to play closer to home, so the Oilers pick up players from Louisville, Evansville, Indianapolis, and places in between. But they have also picked up players from Canada, Venezuela, Dominican Republic, Peurto Rico, California, and Florida. 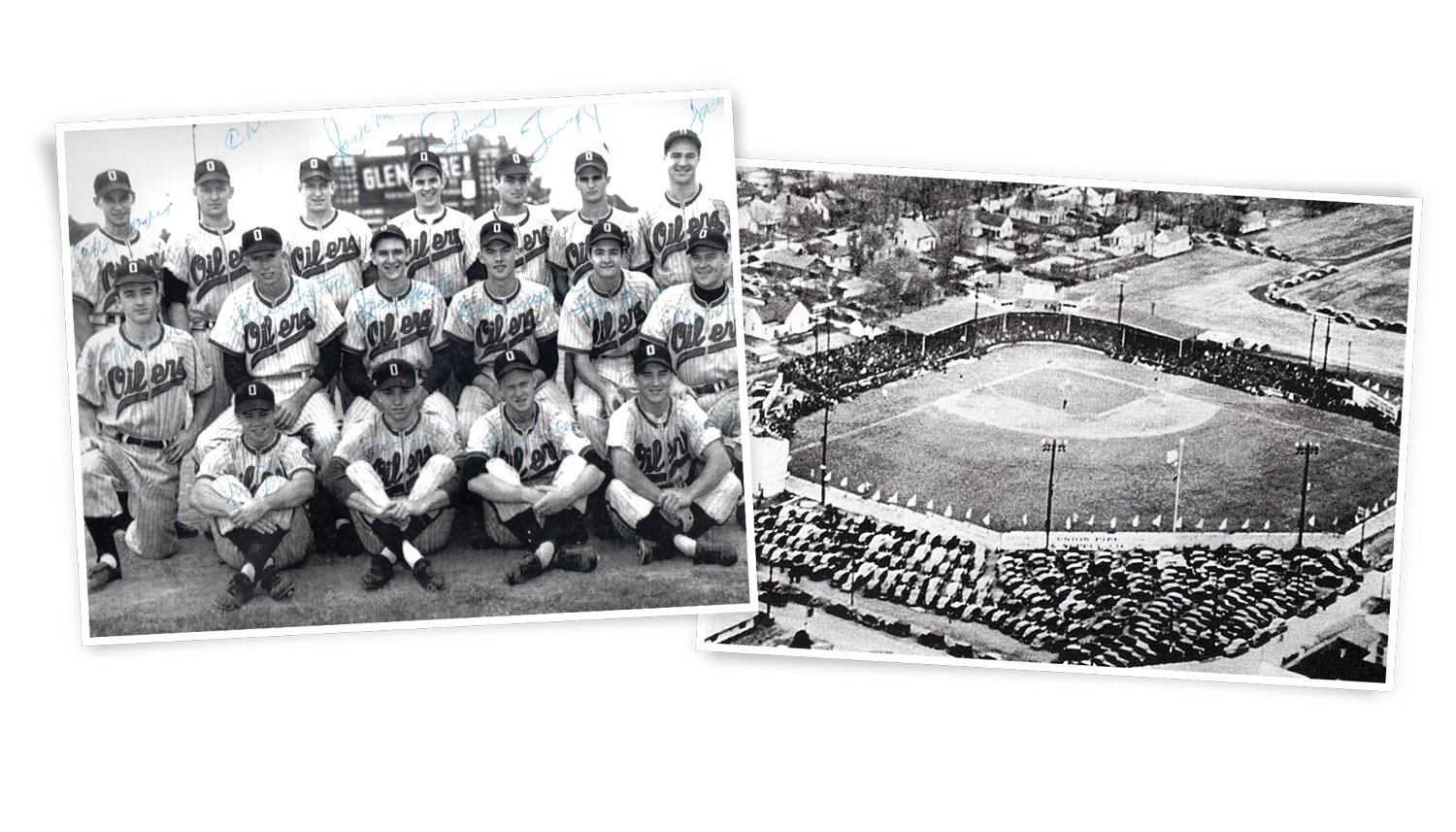 For Love of the Game

Unlike the Oilers of the 50s, today’s Oilers are not a professional organization. These players do not get a salary.

And that is the very thing that gives the Oilers an edge, according to Pierce. “The thing that makes amateur baseball so much fun is these guys really love to compete. They’re young. They’re still dreamers. They’re hoping to get noticed, so they play hard.”

For that reason, you can bet the Oilers will do their part to give you a fun night. “The entertainment value of our games is great. Our product is good. If we do our job right on the field, it’s a fun game to watch. These kids work hard,” Pierce said, sounding like a proud papa.

In a wooden bat league, you will see everything there is to love about baseball: homeruns, double plays, stolen bases, and close plays at the plate.

Glen Snow says the schedule can be a grind for the players. Away games mean they don’t get back in town until 1 or 2 a.m. “They may sleep till 11 a.m., grab lunch, and then they’re back at the field at 3 p.m. to either prepare the field for a home game or load the bus for an away game. So they really only have about three or four hours a day of free time.”

Snow got involved with the Oilers when he was asked by the Lions Club to serve as a host home. Since then, he’s been on a mission to recruit more host home families and help fill the stands with fans.

Glen says The Snows enjoyed hosting some players in the summer. “It’s a good environment for the players and the host families, too. The player’s family also has more peace of mind knowing their son is living with a host family.”

Host families are responsible for room and board. Basically, that means a bedroom to sleep in and a place to do laundry. An extra bedroom or basement with a separate entrance is ideal. Retired empty nesters enjoy the extra company. But Snow says families with young kids also make great host homes because the kids enjoy knowing the players and watching their games.

Host families are not responsible for transportation or expected to provide food for the players. Players are not expected to do extra chores or household responsibilities.

As a small “thank you,” host families get free admission to all games.

For more information about the Oilers, becoming a host family, or volunteering at home games, contact Glen Snow at [email protected]

The Oilers are planning several Kids FREE Nights this summer! Check out owensboroilers.com for details. Bring the kids out and enjoy a free night at the ballpark as a family.

“We believe if families come, they’ll enjoy it and want to come back.”

This article was originally published in the May/June issue of Owensboro Parent.