by Casey Hamilton
in Features
0
0

For many runners, a torn hip labrum can mean the end of their running routine. But for Shelly Hammons of West Owensboro, that very injury was the spark that fueled even bigger aspirations as a runner. Eventually, that spark led her to South Africa, where she competed in the IRONMAN 70.3 World Championship.

In 2015, Shelly tore her hip labrum while competing in the Boston Marathon, and arthroscopic surgery was required to repair it. Following the surgery, Shelly had to spend eight months of “doing nothing.” When she was finally released from the doctor’s care in December of 2015, she began training for triathlons.

Shelly was determined that she would not fall into the category of those unable to return to running. For several years, running and overall physical health had been a way of life for Shelly, her husband Dylan, daughter Nya, age 12, and son, Brody, age 11, so much so that they endeavored to share their love of fitness with others in the community. Shelly and Dylan formed Green River Tri, a group that trains children to compete in triathlons. Dylan, who works at Legends Sporting Goods store, also founded Project Rise, a group of runners who meet each Thursday at 5:30 a.m. to run along the Ohio River. Nya is a competitive triathlete and swimmer for the Marlins, while Brody participates in karate and does triathlons for pure enjoyment, always smiling throughout the whole event, according to Shelly. 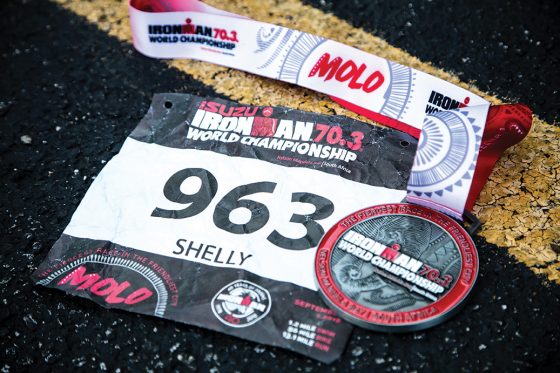 For the last year, Shelly has been working with a personal trainer from Arizona to prepare for her “A” race, which is coming up in Louisville. As part of her training regimen, Shelly bikes 25–50 miles three days a week, runs 7–20 miles three days a week and swims 2,500 meters a day, three days a week, which she says is “a lot of time looking at a black line.” While she wasn’t specifically training for the IRONMAN 70.3, it was a distance she participated in earlier this year in Chattanooga, TN. That race is what qualified her to compete in the IRONMAN 70.3 World Championship in Port Elizabeth, Eastern Cape, South Africa on September 1. Currently ranked 430th in the nation, due to only participating in one major race this year, Shelly has been ranked as high as 113th in the nation and 278th in the country out of 8,667 other females in her age division. She is truly a super star!

The logistics of participating in a sporting event in a foreign country were daunting. Shelly’s bike had to be sent through a bike shop in Nashville via a cargo ship to South Africa. Her carry-on luggage included her biking shoes and helmet, wetsuit, and running shoes. Also included with her on the plane was her nutrition and Gatorade, since that product isn’t sold in South Africa. All packages either had to be powdered or under the 4-ounce liquid limit set by the TSA. To reach their destination, Shelly and her parents, Mike and Sherry Henshaw of Utica, flew to New York and spent a night there before a 22-hour plane ride, plus layovers, on the way to South Africa. Another concern plaguing her was the unknown conditions she would face in South Africa, which she really had no way to prepare for. Nonetheless, Shelly set her goal to finish the event in under five hours.

Upon completion of the IRONMAN 70.3 World Championship’s 1.2-mile swim, 56-mile bike ride and 13.1-mile run, Shelly posted an impressive time of 6:07:32, despite frigid water temperatures, high waves, strong winds and a bronchitis-like illness that, at times, made her consider quitting. As a matter of fact, days after returning to the states, Shelly still required a doctor’s care. When explaining what provides her the inspiration to continue, Shelly said, “I believe that we all have so many talents and we never figure out where the end of those talents will lead us. I always want to push myself to the limits of my talents and lead others toward a healthy lifestyle.” Well, keep it up, Shelly, because you are certainly a role model for strength, perseverance, and grit for all of us.

The Home of Bluegrass