Owensboro Regional Suicide Prevention Coalition will be presenting its Annual Conference on April 27, 2017, 6:30 to 8:30 p.m. (Sign-in begins at 6 p.m.) at Owensboro Health.

Community partners and all interested individuals are invited to attend. The conference will be held in the auditorium of the Pleasant Valley Center, the medical office building connected to Owensboro Health Regional Hospital, 1301 Pleasant Valley Road. (Park in parking lot B.) 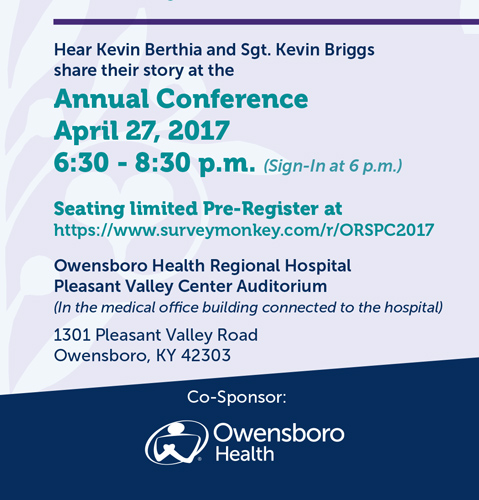 On March 11, 2005, Kevin Berthia climbed over the rail on San Francisco’s iconic Golden Gate Bridge. Overwhelmed by recent events in his life, he was seconds away from leaping to his death.

Then he heard four words that changed his life. “Hey, wait a minute.”

For 92 minutes, Sgt. Kevin Briggs of the California Highway Patrol listened to Mr. Berthia without judging. By listening to understand, he persuaded Mr. Berthia to climb to safety and receive help.

Today, 12 years later, the two have teamed up to make a difference by offering hope to others.

About the speakers:
Kevin Berthia is a suicide prevention advocate and public speaker who works to help others by channeling his own experiences and struggles. Once on the verge of suicide, he now speaks to mental health advocates and interested individuals, offering insight and advice on how to offer hope and help to those wrestling with mental health issues.

Sgt. Kevin Briggs (Ret.) is a 23-year veteran of the California Highway Patrol. During his CHP career, Sgt. Briggs regularly patrolled the Golden Gate Bridge and helped convince more than 200 individuals from jumping to their deaths. His efforts earned him the nickname “The Guardian of the Golden Gate Bridge.” Though retired, he continues to devote his efforts to suicide prevention.

Sign up for this event by going to surveymonkey.com/r/ORSPC2017. Seating is limited, so signing up in advance is encouraged.