Christy and Travis Chaney, who reside at 18 Stone Creek Park, probably have the most unique home in the traditionally traditional neighborhood. Hot pink lamp posts and lime green garage doors are a stark contrast to the homes nearby. And that quirky design flows once you step inside the 1977 home.

Christy, owner of Studio Slant, collaborated with L. Ruth Interior Design to create the home that truly reflects her personality.

“I call Laura Ruth my fairy godmother, because I have crazy, off-the-wall ideas and she facilitates them for me,” Christy said. “We’re a good team, we ebb and flow. I say, ‘I want to paint my quarter round orange.’ And she says, ‘OK, let’s do that.’ She doesn’t think I’m insane, and most people do.”

For someone who wears all black all the time, Christy’s house is anything but monochromatic. When friends come over they point out the irony of Christy’s clothing style and her interior design. But for Christy, it just makes sense.

“I only wear black clothing, so I like this house to be fun and bright,” Christy said. “We live here and this is where my kids live. For 10 years we lived in a Victorian downtown that was on the National Historic Register. It was brown and Victorian. And that was not my style, it was my husband’s style. So when we came here, he said, ‘Whatever you want,’ which makes him the best husband.”

Every room in the Chaney house has a colorful palette and multiple patterns, with Christy’s coveted color, black, tying the entire home together. The Chaney abode is affectionately nicknamed “The Everlasting Gobstopper” by Christy’s younger sister, a name that, to be honest, just makes perfect sense.

Lime green walls and bold black and white patterns pair for a fun space for the Chaney kids – Ryland, Lucy Jagoe and Stone. Tassel garland hanging from the ceiling adds to the whimsy Chaney wanted to create for her kids. Her favorite spot in the room? A shelf of Converse tennis shoes worn by Christy and her husband, Travis, as well as all three kids.

A half bath is just up the funky hallway, with pictures from floor to ceiling. Christy even points out that if you sit on the toilet and bend over there is a sign that reads “You are at 45 degrees.” Because, why not?

Speaking of that funky hallway, the ceiling is wallpapered with all three black and white patterns found in the house. “I’m not a fan of plain ceilings at all,” Christy said. “Every ceiling in the house is wallpaper or painted except my bedroom.” 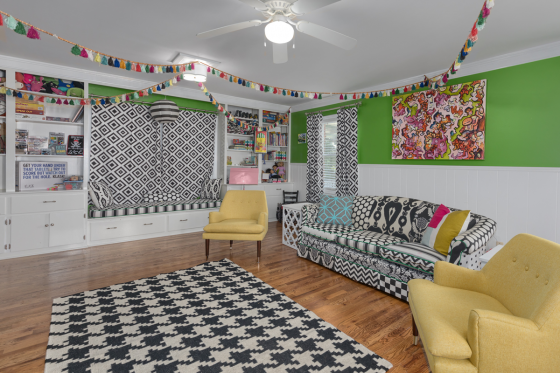 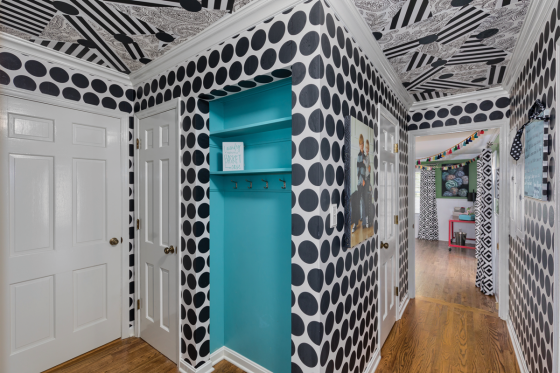 Originally the garage, Christy says it’s 1977 size would really only fit one car. So the Chaneys lived in the home for about two years and decided they would build a new garage, transforming this into an art space. Being the owners of an art studio and just generally loving art, this was a must-have for the Chaneys. Rick Bivens with JMJ Construction converted the space.

The window treatments are hung on metal piping, an idea Christy attributes to the creative businesses that worked on her home. Other room features include that orange quarter round Christy requested, an oversized table with linoleum top for the family’s artistic endeavors, and large cabinets full of enough craft supplies to open her own Hobby Lobby, according to Christy.

“I just feel happy when I’m in that room,” Christy said. “I can be in the worst mood, get out my paints and I’m ready to go.” 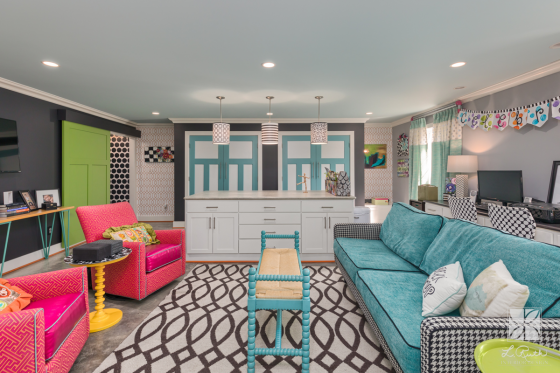 When the Chaneys added on the new garage, they also added a 900 sq. ft. outdoor living area attached to the back to compliment their pool and general love of being outside. Included is a restroom that Christy opens for the Daviess County cross country team. Christy says the prior owners let the team use their water hose and Christy says now they get a bathroom.

The outdoor space is a favorite of the Chaneys, who have lots of family gatherings here. Christy says they will often take movie nights outdoors as late as November because of the quaintness… and the fireplace! 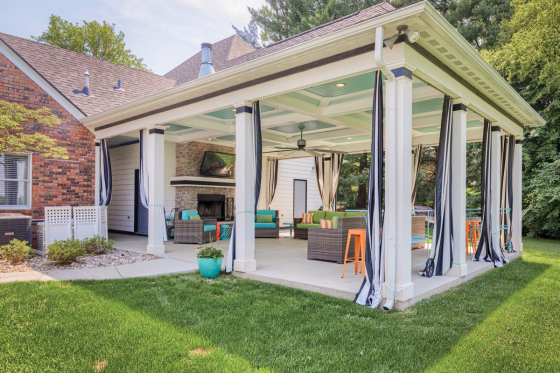 “With a man and a son in the house, they do need one room that is not too crazy,” Christy said. “So this is their one not-crazy room. But it still has a polka dot ceiling.”

Inspiration for this room began with Christy’s desire for black and white checkered curtains. The rest evolved from that single design element. Christy liked the original architecture of the room, especially the fireplace and built-ins, but the “beige, on beige, on beige” had to go. 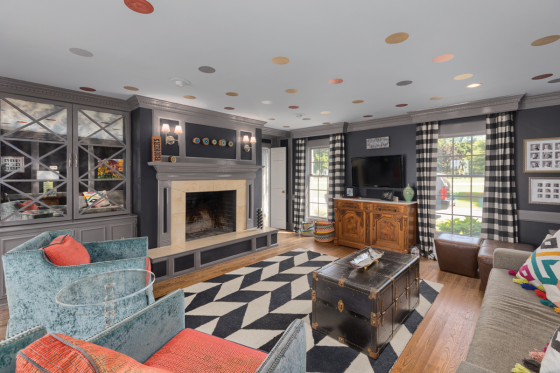 “This is the heart of the home,” Christy said. “It all goes down right here.” She says most nights the family can be found here. Daughter, Stone, will cook in her play kitchen while Christy cooks dinner for the family. Card games are often played around the coffee table. And if Travis needs to work, he commonly chooses the kitchen island rather than his office.

Sentimental pieces can be found in this room, including Christy’s grandmother’s couch, which she got out of storage and recovered, and a wooden wall hanging that could be found above her grandmother’s stove when Christy was younger. All of the walls in this room and throughout the home are covered with art pieces from shows across the region and from Studio Slant. “I like to have original art around me,” Christie said. And she’s not kidding — original pieces can be found in the bathrooms, closets and laundry room. 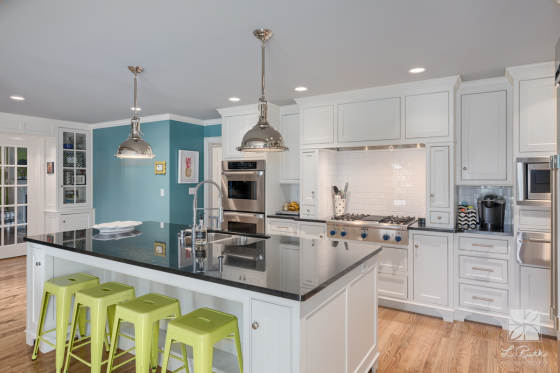 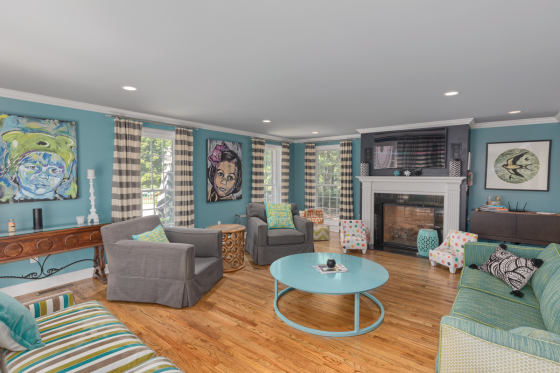 “I’m not a huge pink fan, but because I am a huge lime green, aqua and black fan, pink tends to pop really well,” Christy said. “So as we got further into the process, I started to like it more in my space. The chandelier was gold and I just took it out back and spray painted it pink. That was kind of the jumping off point for this room.”

The dining room table chairs were a classic style that Christy and her interior designer painted and covered with fabrics of different patterns, a favorite style for out-of-the-box-thinking Christy. 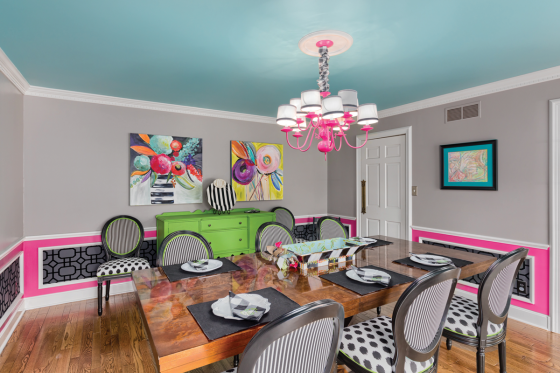 The dining room table was actually Christy’s college senior art project. The table legs are pieces of thefamily’s funeral home at its original downtown location and the door is from Architectural Salvage in Louisville. The piece has traveled with her from house to house. “It always has to have a home,” Christie said.

While this space serves as Travis’ office, Christy came into the space saying she wanted to paint the walls green and the ceiling blue. Everything else just fell into place. 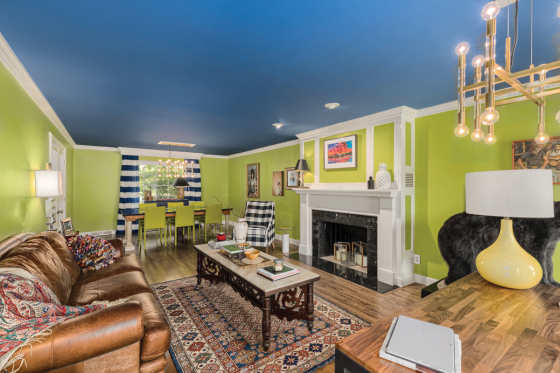 The Chaney’s first daughter, Lucy Jagoe, helped design her own room with the help of L. Ruth Interior Design. Christy says the two were “peas in a pod,” hence the very girly space. The bed was Christy’s as a child, but was missing the headboard. Laura Ruth had the headboard made and mimicked to match. “So she sleeps inthe bed I did as a child, but it’s a little more modern for her.” 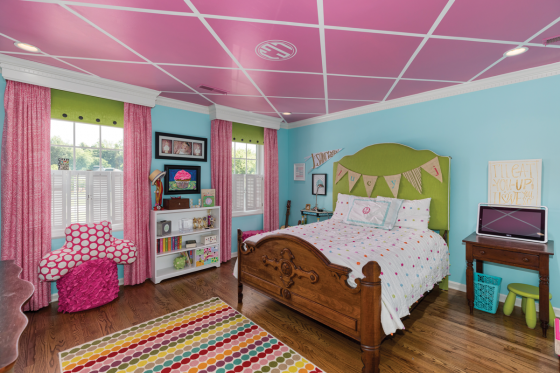 When the Chaney’s decided to adopt a child, they didn’t know if their third child would be a girl or boy. For this reason, they limited the color palette to blues and greens and neutral patterns, like the quirky dog-pattern shade of the light shade. “Then we just added pink trim!” Chaney said, when they found out daughter, Stone, would be joining the Chaney clan. Stone’s nursery remains simple, Christy says. “I don’t want her to feel caged by my design,” knowing that Stone will want to help design her own room one day like her older siblings. 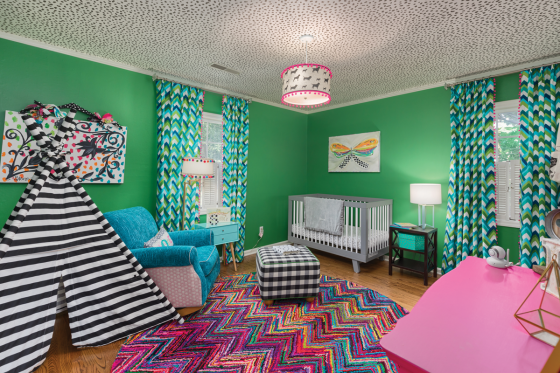 “I have wanted a black bedroom since high school,” Christy said. “I moved in here saying I will have a black bedroom. That was the one thing on my list. And I wanted our bedroom finished. We lived in three houses before this house and each house was a project and the last thing we did was our bedroom. So the bedroom was never actually finished. You know, you leave yourself to last, and this time I was like, ‘no!’”  And although the walls are black, the room feels anything but dark — maybe due to the pops of color throughout the room, or the white ceiling (the only one in the house without paint or wallpaper). 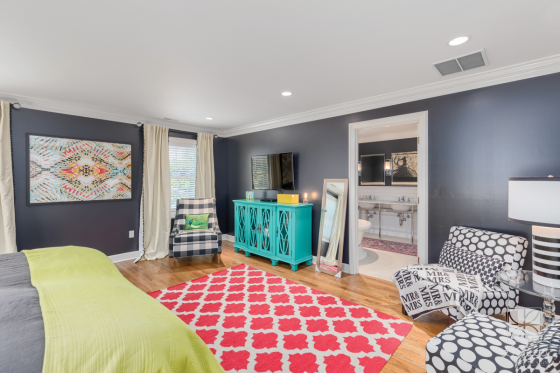 All article photos by AP Imagery