WFIE 14 News interrupted Mayor Payne’s “State of the City” address this morning at the Greater Owensboro Chamber of Commerce Rooster Booster Breakfast to announce breaking news: the opening of their new Owensboro studio.

News anchors Randy Moore, Brandon Bartlett, Beth Sweeney and Jackie Monroe stepped from behind the curtain to announce to the crowd that 14 News will open a studio in downtown Owensboro inside the historic bell house building next to the RiverPark Center on Veterans Boulevard. 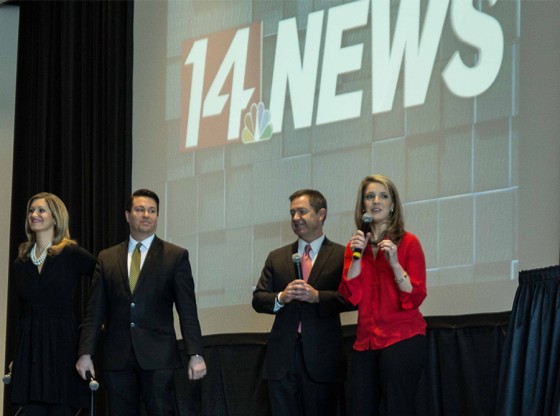 “As a Kentuckian born and raised, I understand the importance of recognizing this city and this region,” Beth Sweeney said.

Signage will be coming soon to the Owensboro studio, which will include a large window so pedestrians can watch as news is being made. A huge, outdoor TV screen will display 14 News live every day.

WFIE General Manager, Jay Hiett, said, “We are extremely excited to be here and open our brand new studio here in Owensboro. We’re so happy to be a part of this progressive city.”

That announcement capped off Mayor Ron Payne’s State of the City, in which he set forth plans for 2016 to continue flood plan developments, extend the Greenbelt and begin work on a dog park. He then proclaimed 2016 as the “Year of the Child” in Owensboro and outlined work that will begin on two “mega” projects: the Downtown TIF (tax increment financing) Project and Highway 54 TIF for Gateway Commons.

The Downtown TIF Project encompasses the entire riverfront from the RiverPark Center to English Park and south to Brescia University.  The project includes:

Just beyond downtown, the Triplett Twist will also be seeing a major redevelopment in 2016.  The Neighborhood Revitalization Project includes $4.7 million in public and private funds over the next four years for commercial and residential upgrades in the area extending from 9th Street to 24th Street and from Breckenridge to Triplett, including portions of JR Miller Blvd.

The Highway 54 TIF will be used to create Gateway Commons, an 835,000 square ft retail, restaurant, office, residential and entertainment complex that has already broken ground and will create:

Year of the Child

“The most important among us are children,” Payne told the crowd, declaring 2016 the Year of the Child for Owensboro.  Plans for the Year of the Child are still in the initial stages, but Mayor Payne said following the address that he plans to bring all parties involved in children’s issues together to talk about “what the issues and needs are in this community and what we can do to address those issues. I’m very much concerned with that.  In this community, with all the great things we’ve got going on to build a better community – if we still have those problems, they need to be our priority.”

In addition, Payne said we must continue to pursue upgrades for an I-65 spur linking Owensboro to Bowling Green via the Natcher Parkway and the I-69 spur linking Owensboro to Henderson via the Audubon Parkway. “I’m asking for your help in this,” Payne pleaded. “Talk to our legislators.  Make contact with your state government.  Remind them of the importance of these projects to our future.”