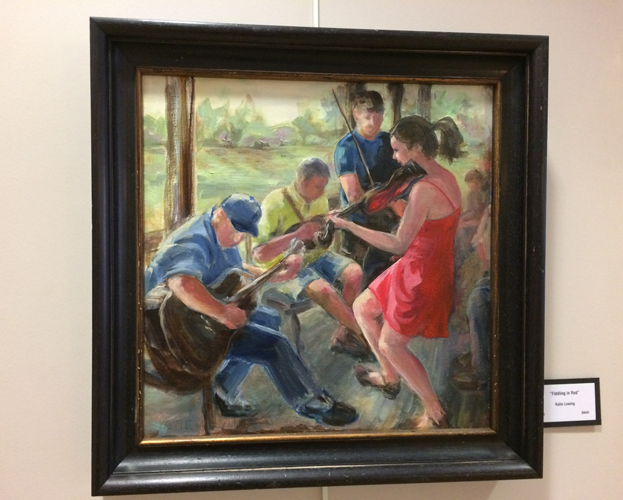 The juried art competition asked artists to enter pieces inspired by the annual W.C. Handy Blues & Barbecue Festival held in Henderson each June. Lowing entered an oil painting titled “Fiddling in Red.” Her subjects included Owensboro resident Emily Wills, the daughter of Dr. Steve Wills and Dr. Teresa Wills. The setting for the piece was the Ohio County cabin of John and Marianne Edge, also of Owensboro. The painting is for sale for $600. 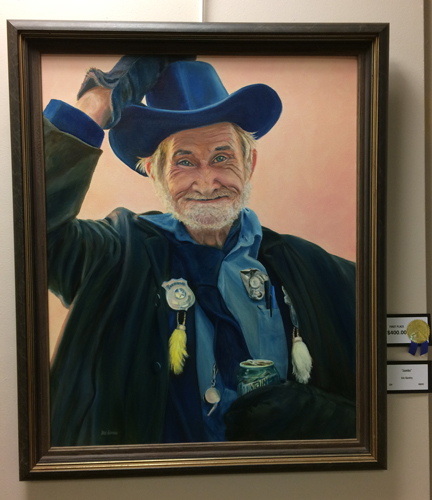 First place in the competition went to former Owensboro resident Iris Gentry for her oil
painting “Jumbo” – painted in memory of a long-time Handy Festival fan and local character. Gentry now lives in Henderson. The painting is for sale for $800.

All submissions in the competition are displayed in the lobby of Field & Main Bank at 140 N. Main Street in Henderson (Use the lobby entrance on 2nd Street). It is open for viewing from 8 a.m. to 5 p.m. each weekday through June 16.

All pieces are for sale with a portion of the proceeds benefiting the Handy festival!

Photos of all entries are available on the Handy Festival Facebook page.

A full schedule of events is on the Handy Festival website

Why Henderson?
W.C. Handy lived in Henderson as a young man and met his wife while playing music there. They married in Henderson and he worked as a gardener for a local professor. Though he did not write any songs in Henderson, he says in his autobiography that it was in Henderson that he learned to “appreciate the music of my people” and “started thinking about” expressing his experiences through a new musical format – giving birth to the blues.

An Unsung Story of Joyful Noise