The scent of food still hung in the air as a full crowd squeezed into the lobby for the ribbon cutting of Kentucky Wesleyan College’s newly renovated Kendall Hall this afternoon. One of the many features of the renovation is an open kitchen on the main floor that students are free to use. “They tried the new kitchen out for a Resident Assistant training last night,” Dean of Students Scott Kramer told the crowd.

The two-year, $3.75 million renovation project of the four-story resident hall includes the addition of an elevator, two kitchenettes, and two multipurpose classrooms in the basement, along with new furniture, plumbing, electrical and HVAC systems. Each of the 75 rooms now has its own air conditioning/heating unit and movable furniture so students can “create their own space,” as Kramer put it.

“I absolutely love it,” said Michelle Trenda, a senior at Kentucky Wesleyan who is a Resident Assistant in Kendall Hall. “It’s very modern, and very accommodating for the students. I think it really brings forth the new vibe we have going here at Kentucky Wesleyan.”

The residence hall, built in 1963, is named after Harry R. Kendall, a long-time benefactor of the College who died in 1959.

“Kendall Hall is one of the crown jewels on the Kentucky Wesleyan campus and has been for over 50 years,” said President Barton D. Darrell. “We are thrilled to be able to preserve the incredible history of the building, while giving our current and future students a state-of-the-art residence hall in which to maximize their campus experience.” 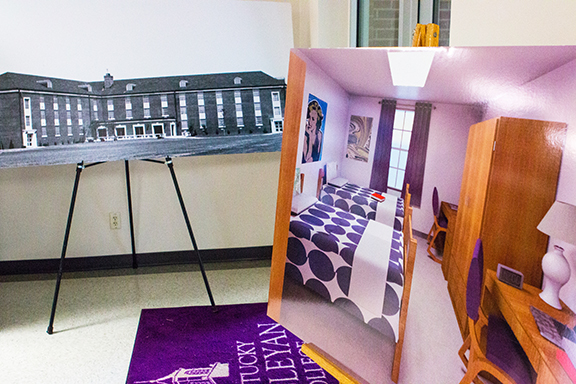 According to Kramer, early reports from the students have been “very good.”

Trenda was an RA in Peeples Hall last year during the renovation and says she is especially excited to be in the new building. “This environment will help build community this year and allow us to establish lasting bonds with each other,” she said.

“What this is really all about, more than just bricks and mortar, is increasing the quality of education for our young people,” said President Darrell, just before cutting the ribbon and inviting the crowd to tour the building.