Kenny Kelley, a school bus driver for the Daviess County Public Schools, was presented the 2016 Fred Award by the Kentucky Association of School Administrators during a ceremony in Louisville today.

The Fred Award recognizes district heroes for their exceptional devotion to kids and service to others. KASA notes that “the presentation of Fred Award finalists is one of the most prestigious and respected awards for non-administrative staff or volunteers statewide.” The Fred Award is named in honor of the inspiration for the book “The Fred Factor: How Passion in Your Work and Life Can Turn the Ordinary into the Extraordinary,” by Mark Sanborn, which explores how characteristics such as care, loyalty and devotion can be used daily in education, business, industry, commerce, and life.

Kenny Kelley was the DCPS district’s 2016 Great Expectations Customer Service Award winner. One of the individuals who nominated him for that award said, “He is the grandfather many children do not have.” 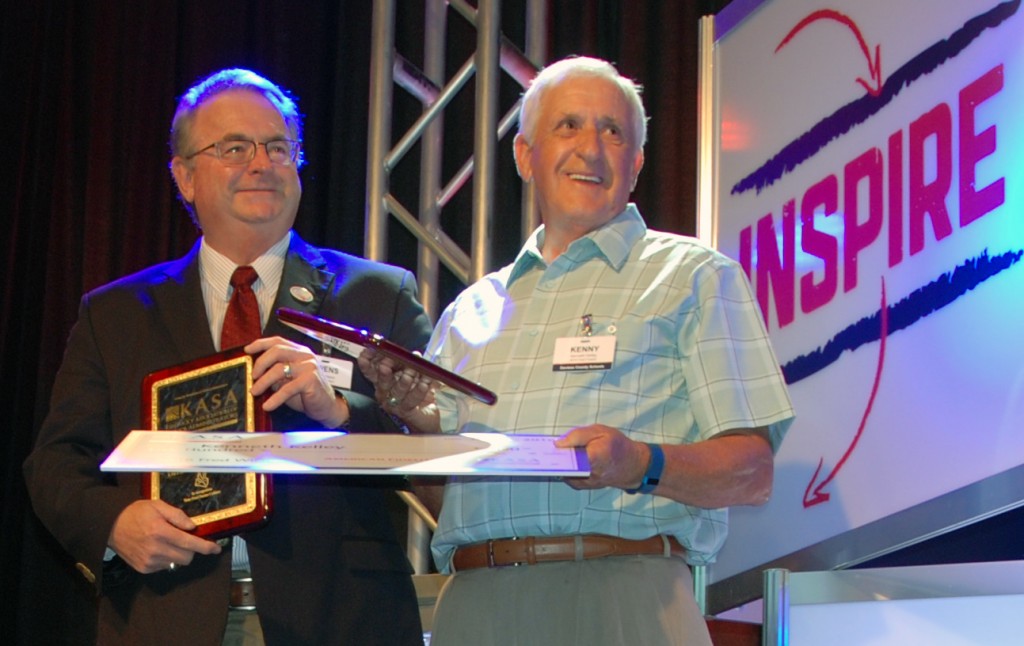 DCPS Superintendent Owens Saylor said, “Service is at the heart of everything we do, and Kenny Kelley exemplifies that dedication with heartfelt care and concern for others. Our district is honored to be represented by a gentleman of his caliber as he sets an example that we should all strive to follow.”

KASA deputy director Rhonda Caldwell said, “The attitude of giving sacrificially to students is just something that Kentucky’s school and district personnel have engrained in them. This award is representative of the dedication Kentuckians have for their children.”

Kenny and Ruth Kelley were guests of honor at a reception hosted by KASA at the Galt House in Louisville on Thursday evening. He and two other state finalists were recognized at a special ceremony this morning in the Galt House Grand Ballroom. As the overall winner, “Mr. Kenny” received a plaque and a cash award of $500. The ceremony was also attended by family members and friends of the Kelleys, as well as DCPS district and transportation department administrators, members of the DCPS Board of Education, faculty and staff members and colleagues showing their support for our “Fred,” Kenny Kelley.

When school is in session, “Mr. Kenny” begins his day at 5 a.m. to serve coffee to dispatchers. He begins “pre-tripping” inspection of his bus at 6 a.m. and leaves the lot at 6:25 a.m. to pick up his first preschool rider at 7 a.m., giving every child a warm welcome as they begin their day.

However, instead of simply unloading the children at Highland Elementary School and driving away, Mr. Kenny always “goes the extra mile.” He and his bus monitor line up the children “like a choo-choo train” and lead them into the cafeteria, where he helps them take off their jackets and backpacks, then leads them through the breakfast line, carrying trays, opening milk and juice cartons, cutting up pancakes and wiping up spills. He speaks with each child, calling them by name and encouraging each to have a great day of learning in the classroom.

Mr. Kenny’s concern for children does not end when the last child is dropped off in the afternoon. He and his wife Ruth often attend T-ball games, school plays and other events in which “his kids” are participating. He can often be found in the stands, cheering and encouraging and saying the words every child loves to hear: “I am proud of you.”