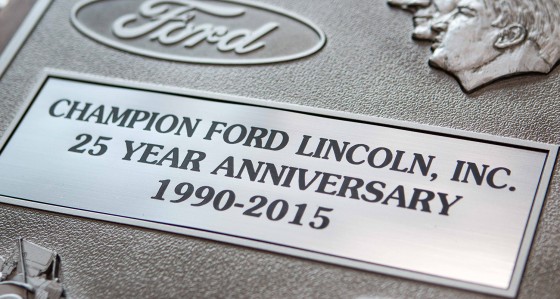 Highlights of the celebration included a live performance by country artists LoCash, live painting by Aaron Kizer and a compilation of 25 years of advertising.

Brubaker, a former MLB pitcher (for the Los Angeles Dodgers in 1967 and the Milwaukee Brewers in 1970 before a torn rotator cuff ended that dream) acquired the Ford dealership in 1990 from the Holder family. In the summer of 2000, the dealership moved from its longtime location to its current, much larger, 10- acre site on JR Miller Boulevard.

Brubaker’s sons have followed into the automotive business. Bruce III, known as Duke, is the General Manager/President of the Owensboro location. He graduated from the University of Richmond in 1992 and joined the dealership after having sold used cards in Lexington for two years.

Tyler is the General Manager of the Champion Ford REO location in Rockport, IN. He was born in Evansville and graduated from Daviess County High School and Western Kentucky University.

Duke says the dealership owes their success to “The Champion Experience, where people are waited on promptly by a friendly sales staff, treated with respect and not subjected to pressure tactics.”

“The key to Champion’s growth in 25 years is leadership. We’ve sustained that growth because of our people.  We have employees that are truly engaged with the customer and each other.  Success isn’t easy, but with great leadership and employees, it’s easier.” – Duke Brubaker, General Manager/President

Stranded Students Back on the Move

My Custom Concierge at Your Service