Stranded Students Back on the Move

At 1:55 this afternoon, after 17 hours of being stranded in the winter storm on the Pennsylvania Turnpike, a bus with 37 Owensboro Catholic High School students and 10 adults is finally back on the move.

The group is on their way back from participating in the March for Life in Washington, D.C.

Nancy Neal, whose daughter Regan is on the bus, told OwensboroLiving that the group decided to drive north to Columbus, Ohio in hopes of dodging the worst of the snowstorm. Apparently, there was a wreck blocking both lanes several miles ahead of the bus, which left them stranded overnight on the interstate.

Regan Neal said the bus was stalled last night around 7 p.m.  Now that the bus is moving again, they plan to stay in a hotel one more night and drive back to Owensboro Sunday.

As you can imagine, the travelers are looking forward to a warm shower and a bed tonight.

“We’re okay.  We had snacks and water,” Neal said.  “We’re just glad to be moving again!” Thankfully, the bus had plenty of gas, which meant they had heat and power to charge cell phones so the students could stay in contact with parents. 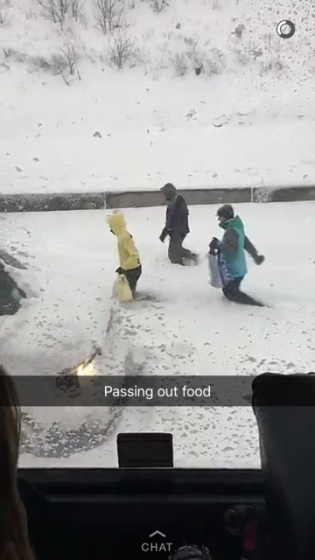 Despite being stuck, it had been a pretty eventful day.  Tweets and updates the students had posted on social media have been noticed by several national media outlets. The group Face Timed with Good Morning America this morning.

Some of the chaperones checked on other vehicles and shared what little food they had with them. Since the bus had heat, they also invited a few elderly motorists to sit on the warm bus while they waited.

The bus is moving slowly, but at least they’re making progress.

My Custom Concierge at Your Service