by Ashley Sorce-Wedding
in Features
0
0

Glenda Wright is a very poised, extremely articulate, and mature 22-year-old, who is currently interning in Governor Matt Bevin’s office and in the office of the Department of Community Based Services Commissioner (DCBS), Adria Johnson.

But it was Glenda’s foster care background that made her a perfect fit for this internship, given the Governor’s initiatives in foster care and the first lady’s heart for children aging out of the foster care system.

For most of Glenda’s life, she and her three brothers were raised by her grandmother. “She was our mother, our father, our everything,” Glenda said. Glenda’s mother had a history of substance abuse, and her father was not in her life.

In 2008, Glenda’s mother moved with her four children to Evansville without informing Glenda’s grandmother of their relocation. Glenda, then in middle school, and her three brothers suffered the effects of a parent with a substance abuse problem, living in and out of homeless shelters and sometimes in their mother’s car. It was when her mother abandoned her children at a daycare for a week that Indiana Department of Child Protective Services (DCPS) stepped in. They located the children’s grandmother and reunited them in Owensboro.

Glenda’s grandmother, who all four children already saw more as a mother than a grandmother, began the process of becoming primary caregiver for her grandchildren. But in 2009, their grandmother passed away from a heart attack.

“She was the one person that truly believed in me,” Glenda said.

Without a guardian, the children went into foster care, first being placed at St. Joseph’s Peace Mission while DCPS found a family able to take in all four teenagers.

“DCPS really puts a big emphasis on trying to keep siblings together and keep those bonds together,” Glenda said.

All four children were eventually placed together in a foster home, but over time behavior problems arose that forced the siblings to be separated. “Now looking back on it, that was to be expected,” Glenda said. “We literally just lost the biggest person in our life. And then to go from that to trying to figure out what is foster care — what does this mean for us?”

Each brother was re-placed with another foster family, and then, finally, 14-year-old Glenda moved to a temporary respite placement, which should have been for a weekend, but ended up being for a few months.  She was finally placed with her last foster family, a single mom. She remained with this family until she graduated from Owensboro High School at age 17, and then moved on to attend Murray State University.

At MSU, Glenda decided to pursue business and legal studies. “I always had the mindset that I was going to college, even when I was broke, poor and hungry, sometimes bills weren’t paid, and we didn’t have electricity,” Glenda said. “I thought, ‘I don’t want to live like this for the rest of my life.’ I really want better for me and for my whole family.”

“Growing up with everything that I saw — drugs, abuse of alcohol and what that does to a family — and seeing the injustice of the foster care system, combine all of that together and it just gave me motivation and that fire to make change,” Glenda said.

Despite her demanding course load, Glenda was determined to be that change, working full time as the President of Voices of the Commonwealth at Murray State University. Currently still in this position, Glenda advocates for youth in Kentucky’s foster care system, acting as a liaison between the Kentucky Cabinet for Health and Family Services Administration (CHFS) and foster youth.

“This advocacy role has taught me how you take negative experiences and truly change them into a positive,” Glenda said. “We need someone to put a face to the struggle of foster care youth. I feel like there is a very negative image of what foster kids are, definitely foster kids of color. It taught me if no one is willing to do it, then nothing changes. And I’m not okay with nothing changing.” 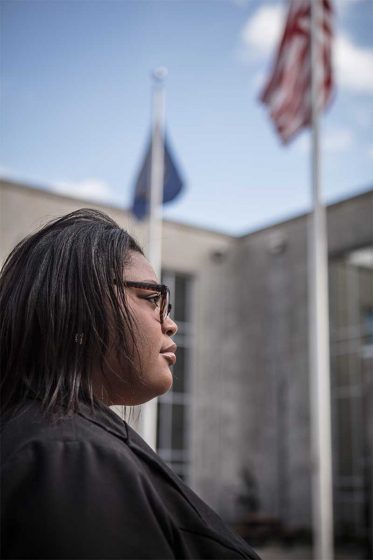 It was this position that gave Glenda the opportunity to intern with CHFS and DCBS in 2016. She enjoyed her work so much that she wanted to take her experience one step further and intern in the Governor’s office. Because of her background and performance in her previous internship, Glenda was extended an internship in the Governor’s office after her graduation from Murray in June 2017. Through this position, she worked in the statewide fatherhood initiative and single-handedly created a statewide foster youth rights video. The internship was originally set for summer 2017, but was extended to nine months because of Glenda’s determination and drive.

Glenda gives a lot of credit to her successful transition from the loss of her grandmother to what she calls her high school family at Owensboro High School.

“They pushed me to be a better me,” Glenda said. “I could have been one of those kids that they sent to an alternative school and said ‘we are not equipped to handle this kind of behavior,’ but they kept me in school, truly helped me keep my grades up, and just motivated me and worked with me. It takes a village, and I definitely have a village raising me up and giving me the strength and the courage to keep going.”

In a recent conversation with the DCBS Commissioner about permanency, Glenda told her, “Everyone’s permanency looks different.” For Glenda, she has her biological family, she has her foster family, and she has her school family. Probably most important out of that school family is her long-time best friend, Olivia Payne.

Glenda and Olivia met when Glenda was in 6th grade at a middle school summer music program. The two have been best friends ever since. Olivia was a constant source of support for Glenda throughout her difficult childhood. Since graduating high school, the two have remained best friends. Olivia’s family even adopted Glenda into their own family of 10 children. Glenda says it wasn’t a true adult adoption, but it was a special family gathering where they gave her a handmade quilt that each of her adopted siblings received when they were younger, as well as a certificate of adoption.

“Her family has really wrapped their arms around me,” Glenda said, who now considers herself to have her three biological brothers, a foster brother and 10 adopted brothers and sisters through Olivia’s family.

Glenda moved from Murray to Lexington, where she commutes to Frankfort for her internship in the Governor’s office. When asked what life looks like in the future, she knows she will be in law school in the fall of 2018, but beyond that she is not sure.

“Even though I have been away, I have roots here. This is where my heart is at. I would love to come back to Owensboro — settle down here, buy a house, have a career here, whatever that looks like. Because this is home.”

The Social Costs of Foster Care

By age 23, youth who aged out of foster care in the United States have fared far worse than youth raised in permanent homes.

7x more likely  to have been homeless

5x more likely to have been arrested

6x more likely to have been convicted of a crime

Date Night at the Owensboro Symphony