What’s Next for the Campbell Club?

If the iconic cupola atop 517 Frederica could talk, it would tell you tales from three different centuries of development in Owensboro. The Victorian style home was originally built in 1880, when the 500 block of Frederica was just outside the hustle and bustle of Owensboro’s booming downtown district.

As Owensboro expanded in the 1900s, the mansard-roofed tower stood tall as it watched the migration of commerce away from downtown to Wesleyan Park Plaza and south Frederica, to Highway 54 at the turn of the century. And just as history has a way of repeating itself, it saw the parade of new shop owners, restaurateurs, and heavy construction equipment on their way back downtown over the past 10 years.

If the wooden staircase in the front foyer could talk, it would recount nearly 150 years’ worth of stories from family Christmas mornings, boarding house guests, dinner conversations, jokes around billiards tables, boisterous business lunch meetings, social and civic events, and friends bellied up to the old oak bar.

From 1959 until late 2017, the repurposed home was known as the Campbell Club, a private dining club that was well known for fine dining plated by renowned chefs like Bill Hughes and Matt Weafer.

And soon, all that storied history will come alive to a new generation when the building once again finds new life. This next phase will allow Owensboro residents who have never been inside the building a chance to soak up its character and enjoy a dining experience in an atmosphere that is very rare in this region.

At the time of this writing, there are two restaurants interested in leasing the building, and there could be more prospects as well. But building owner Jeff Danhauer says the next tenant will be a restaurant that stays true to the building with respect to its history and heritage. “We’re looking for that right fit that will complement the building and find a niche that will be successful. As of right now, both people who are interested will be a real asset to Owensboro.”

The Campbell Club opened in 1959 as a private dining club at a time when lunch and dinner meetings were a popular way to conduct business, especially for out of town clients, and nights on the town were a popular way to entertain guests. Campbell Club members paid dues to cover utilities and maintenance on the building. In return, members and their friends and guests could enjoy a fantastic meal in a cozy, private atmosphere.

But you have to keep in mind that when the Campbell Club was started, the only options for fine dining in Owensboro were the Country Club and Gabe’s Restaurant. Clearly, that is not the case in 2018, when it seems new restaurants open every day in Owensboro.

“Back then, it was as much a social club as anything,” Danhauer said. “Back in the 60s, you went to the Club to socialize. Nowadays, with social media, you don’t even have to go out to socialize.”

What it comes down to is the realization that the social club model no longer works the way it once did. According to Dr. Tom Sabetta, the president of the board when the decision was made to dissolve the Club, there was a waiting list for membership in the 60s. An article published in the mid-90s reported membership above 400 members. At that time, the membership was capped at 450 by recommendation of the fire marshal.

Danhauer believes 2008 was the pivotal point. When the recession hit, the club was never able to fully recover. Membership dipped to below 100, but by the time Dr. Tom Sabetta began his term as president of the board in 2016, there were 185 members on the books and membership continued a steady increase to the 235 final members in 2017. “The problem is not a lack of membership,” Sabetta said. “Our numbers were growing. The problem was fewer members were exceeding regular food minimums, which made it difficult to cover costs.”

Danhauer was on the Campbell Club board and decided to purchase the building in order to provide cash to clear some outstanding debts. But by then, it was clear the business model that worked for several decades was not working anymore. Eventually, the board decided the club was no longer viable.

Long-time member and former board chair, Judge Nick Burlew, whose father was one of the founding members of the Campbell Club, looks back with many fond memories, and gives credit to “strong leadership, good food, and great atmosphere” for sustaining the Club from 1959 to 2017, noting it outlasted similar dining clubs in Evansville, Louisville, and Lexington. “It’s remarkable that a club like the Campbell Club could survive in a town the size of Owensboro as long as it did. We had a tremendous run.” 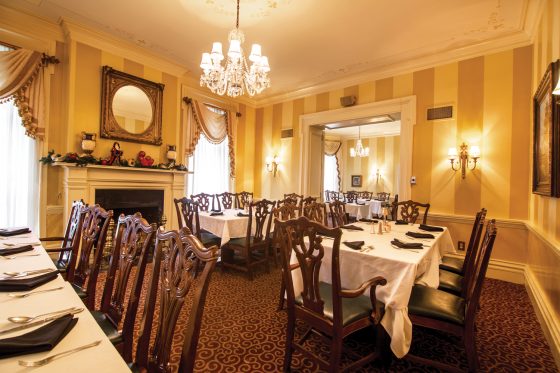 The membership was kept abreast of developments, so the closing was expected. Bittersweet as it is, the silver lining is that the building has been well preserved and should convert easily into a new venture.

Rather than looking back in sadness, Jeff prefers to optimistically look forward to the future and do his part to ensure the legacy of the building carries on. “We’re really hopeful to keep it as a landmark and open it to the public to let even more people enjoy the charm of the building.”

“We’re looking for a public/private partnership,” Dr. Sabetta added. “It’s set up well for a public restaurant. It already has a kitchen, dining tables in every room, and great decor.”

The rooms lend themselves to good conversation. Each room has a different motif.  The Oak Room and the bar in the back have a casual feel. Other rooms have large community tables. A few rooms have several tables for smaller parties. The rooms upstairs could be rented for private events.

Danhauer says the new restaurant—whatever it ends up being—will be a destination restaurant. “Each restaurant has its atmosphere. The attraction for this building is southern charm and the slower pace. It’s astep back in time. It feeds into the allure of Downton Abbey culture but with the southern feel of Gone with the Wind.

“This building is designed for conversation,” he continued. “That’s what makes it different. It’s not just the consumption of food; it’s an evening of entertainment, except the people at your table are your entertainment. When you come here you plan to spend a couple hours getting reacquainted with each other. That’s the way it’s always been.”

In the meantime, the staircase waits to welcome the next rush of dinner guests. But the building is far from quiet. The ambiance is still there. The tradition is still there. The walls exude peace and tranquility, but there is a buzz of excitement from generations upon generations of fine food and conversation still lingering in the air.

History of the “The Gillim House” Building

According to the Preservation Alliance of Owensboro/Daviess County, the house at 517 Frederica was built in 1880 by John S. Woolfolk, who was the incorporator of the Peoples’ Wharf-Boat and Transfer Company. Having been preserved and restored, it stands today as one the few remaining examples of Second Empire Victorian architecture that dominated Frederica Street in the late 1800s. In those days, Frederica was one of Owensboro’s premier residential areas. Woolfolk sold the home a few years later to C.D. Jackson, a wealthy landowner who was a distant relative to President Andrew Jackson. It changed hands once again before being purchased by Dr. W.F. Gillim, who owned it for 31 years. Hence, the home is still commonly referred to as the “Gillim House.” In the 1930s, it served as a boarding house. When the Campbell Club incorporated in 1959, the Gillim House was saved from being torn down, and was repurposed into a private dining club. After some restorations in the 80s, the Gillim House was listed in the National Register of Historic Places on March 28, 1986.