Taking to the Ice with Owensboro Rampage

Living in the South, most of us, including myself, don’t know a lot about the game of hockey. I watch the highlights on SportsCenter of shootout goals and the occasional fistfight, but I still couldn’t explain exactly what “icing” or “the crease” means. To be honest, the majority of my hockey knowledge doesn’t extend much beyond The Mighty Ducks. Fortunately, I found that my ignorance of the game of hockey isn’t shared by the younger generation. Thanks to the Rampage, a local high school hockey club that’s grown in size and popularity over the last decade, the sport of hockey is alive and well in Owensboro.

As I learned by interviewing Rampage head coach Mark Cross and a few of his players, playing hockey at this level requires a lot more than athleticism and the ability to skate. Namely, high school hockey takes immense dedication. For the Rampage, their season begins with tryouts in late July and early August, and doesn’t come to a close until May. During that stretch this season, Cross expects that his team will play a total of 50 games [up from 35 last year]. Spread out over a 40-week season, that means the Rampage will play at least one game a week for nine or ten consecutive months. In fact, depending on their schedule, they may play as many as five games in a single weekend. Add to that three hours of practice spread out between two nights during the week, and you start to understand the intense level of commitment that these players (and their parents) possess.

Did I mention that practice doesn’t typically start until 8:00 p.m. or later? Remember, all of the members of the Rampage are high school students, juggling academics and other extracurricular activities on top of their busy hockey schedules. With that in mind, I fully expected to see the team dragging into The Edge Ice Center at eight o’clock on a Tuesday night, exhausted from a full day of school and homework. What I saw was the exact opposite. Just seeing them walk into the building, you could sense right away that each of the players was excited to be at practice. My conversations with a few of the seniors on the team confirmed their love of the game. According to Dalton Boarman, a senior forward from Daviess County High School, Rampage hockey provides an opportunity to let loose, as well as a chance to play the sport with his best friends. Defensemen Drew Owen and Easton Phelps, both seniors at DCHS, echoed Boarman’s sentiments, saying that hanging out with friends at hotels and on road trips are some of the best parts of being on the team.

And it’s a good thing the players don’t mind road trips. Since none of the local high schools sponsors a hockey team, the Rampage have to look beyond the borders of Daviess County for their competition. According to Cross, the Rampage faceoff against high school teams from Oldham County, Louisville, Lexington, and Evansville. In addition, they play club teams in cities from Nashville to Dayton to Indianapolis. Obviously, this requires extensive travel, which, in turn, requires extensive support from parents and coaches. Cross’s son Davis is a member of the team, as are the sons of assistant coaches Brent Cattoor (Beau), Jason Baker (Garrett), Scott McFarland (Mayes) and Aaron McFadden (Keegan). And those parents who don’t serve as coaches spend their time driving, caravan-style, from city to city each weekend for tournaments.

With the expense of facilities, equipment, tournament registration, hotels and travel, the cost of playing high school hockey adds up quickly. That’s why, in addition to the financial support of their players’ parents, the team also relies on the support of the community. This season, Sterett Crane & Rigging stepped up by donating their corporate box to two Nashville Predators games. The team plans to sell the tickets to raise extra funds to cover some of their expenses. Over the years, other individuals in Owensboro have stepped up to help support the team financially, and one anonymous donor even established an endowment to sponsor a local girls’ team.

Judging by the dedication of the players, parents, coaches, and supporters, one look at the Rampage makes it clear that the sport of hockey has a bright future in the City of Owensboro. 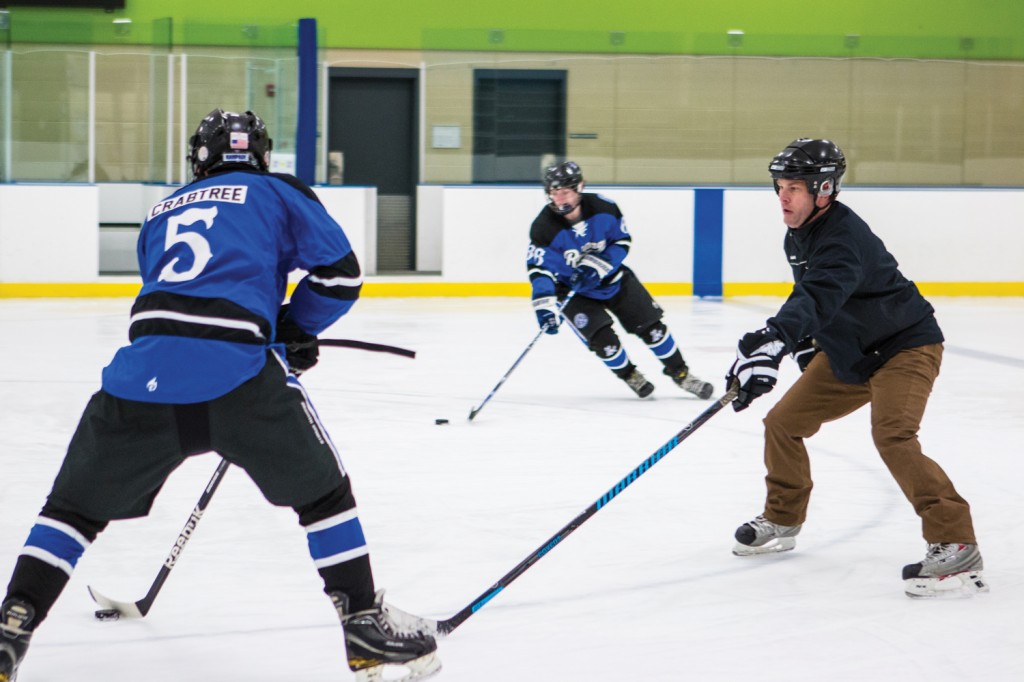 Everything Happens for a Reason