by Beth Noffsinger
in Features
0
0

January 17, 2017 started as an ordinary day for Zachary Anderson – until his phone rang as he sat at his desk at First Free Will Baptist Church in Owensboro. A woman responded when he answered.

“She says, ‘this is Casey Potter from the White House, and I am calling from the office of the pardon attorney. Can I speak with Zachary Anderson,’” Anderson, the youth minister at First Free Will Baptist, recalled.

It was a call that Anderson hoped he would receive. It was the call that will soon allow him to register to vote and possess a firearm, among other restored rights.

Potter told him that President Barack Obama decided to pardon Anderson, who had been convicted in federal court for conspiracy to defraud the government.

“I wept, and I thanked God,” he said. “And I got on the phone, and I called my wife (Lauren), and she was ecstatic. That process, it wasn’t an easy thing.”

Federal conviction, then a call to preach

Anderson’s journey to his pardon began in the early 2000s, when he said he got caught up in some relatives’ plan to make fake IDs for illegal immigrants. The family members used his computer.

After his conviction, the Owensboro resident spent 13 months at Manchester Federal Prison Camp in eastern Kentucky. He had never been in trouble with the law before, so he was put in a minimum-security facility where inmates lived in a dorm setting instead of cells.

“While I was in there, that’s when I answered my call to preach,” said Anderson, who grew up attending First Free Will Baptist. “I started getting serious about the Word, going back to my roots. I rededicated my life to the Lord in there.”

It started with a prayer group with two or three other men. After several months, the prayer group grew to 20 to 30 men, including guards. Anderson became close to the prison camp’s chaplain, who let him preach an Easter Sunday message.

“I also started a Bible study for men there,” he said. “I left it in the hands of other brothers there, and it’s still functioning there.”

‘I wanted to preach the Word’

Anderson wasn’t sure what direction his life was going to take when he got out of prison.

“I didn’t know what I was going to do,” he said. “I just knew I wanted to preach the Word somewhere.”

He decided to attend his home church, where he had a good relationship with its pastor, the Rev. Tim Hall. Eventually, Anderson approached the pastor and church board about working part time as youth minister.

After several months, he was offered the job full time.

“I was more than willing to entertain him working with us,” said Hall, who has known Anderson since the youth minister was a child. “It started out very limited at first. As he proved himself and proved himself capable of doing more and more in that area, we gave him more opportunities. He has been very good at what he has done. He’s got some very good, trophy-like accomplishments down through the years.”

Several members of First Free Will’s youth group have gone on to do mission work in the United States and internationally.

“We’ve never had a youth group as good that has done as many things as when Zach took that helm,” Hall said.

An obstacle to adoption

Anderson and his wife wanted to be parents, and after unsuccessful attempts at having a biological child, the couple decided to explore an international adoption.

After a seemingly successful meeting with a social worker from an adoption agency that included a home study where Anderson was up front about his past, he did some research online and learned that a person with a federal felony conviction couldn’t adopt internationally.

“So our hopes and dreams were kind of crushed at that moment,” he said. “I remember emailing the lady and saying why didn’t you tell us this? This would have saved us a lot of heartache.”

The social worker helped Anderson participate in another study where he went to Louisville to meet with a person trained in criminal psychology who assessed whether he was likely to reoffend. Anderson passed, and the family received an email that they received an exception.

“I remember us opening it up and us both crying and hugging each other,” Anderson said. “It’s pretty amazing that we got approved to adopt internationally.”

The couple began the process of adopting an Ethiopian child – Anderson had done mission trips in Africa – in 2012, and they got to bring their son, Solomon, home in 2013 when he was 7 months old.

The adoption agency the Andersons worked with allows parents to select what gender child they want and sends referrals with photos and the child’s medical history.

“What happened, we were a family in waiting,” Anderson said. “We didn’t care if it was a boy or a girl. We were just praying God would give us the right referral.”

Solomon was the first referral the couple got.

“We weren’t going to say we’ll wait for another one,” Anderson said. “This is the boy. This is what we’ve been praying for.”

They had selected the name Solomon for a boy when they began the adoption process. Solomon’s birth mother couldn’t afford to take care of him and had left him at a police station. She had given him the name Dawit, which translates to David.

“Solomon is King David’s son,” Anderson said, “so it was like ‘wow,’ so we kept the name – Solomon Ray (my middle name) Dawit Anderson.”

When the Andersons were adopting from Ethiopia, couples had to make two trips to the country before the adoption could be completed. On the first trip, both parents spent a week with the child and went to court. This was after sending a variety of documents to the country.

The couple also had to meet a judge and explain why they wanted to adopt, and then the adoption could proceed pending the judge’s approval.

Though the Andersons got a judge’s approval, a second trip was required to actually bring home their son. The couple Skyped with their young son, and they were able to send him clothes and stuffed animals, in the meantime.

Because the referral happened so quickly, Solomon never went to an orphanage. He lived in a transition home with a nanny who cared for him since the Andersons were waiting for him.

About six weeks after their first trip, Lauren Anderson and her mother made the second trip to bring Solomon home.

“He’s amazing, this kid,” Anderson said. “He’s one of the smartest kids I’ve ever had the privilege of dealing with. He’s above average on everything.”

The Andersons raised around $37,000 with the help of their church family to adopt Solomon.

“Solomon has become so much a part of our church,” Hall said. “Everybody loves him and accepts him. He helps our other kids see our world as it is. We are all created by God regardless of race or country of origin.”

Though Anderson found a calling at the church and had been able to adopt his son, he said “it has always weighed on me that I have a conviction under my belt.”

He finally decided to try to have his conviction expunged when he was rejected from the Owensboro Police Department’s Citizens’ Academy because of his record.

“They are extremely rare and hard to get,” Anderson said. “When you think about it, it seems like an impossibility.” 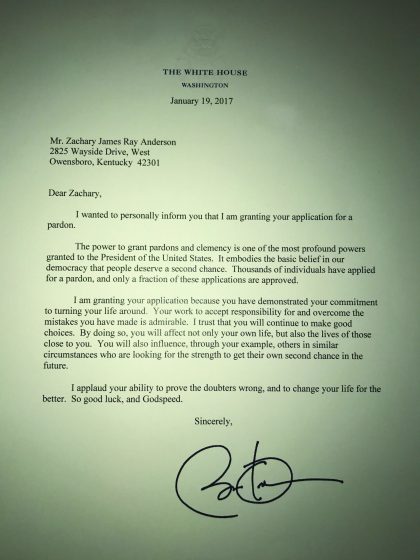 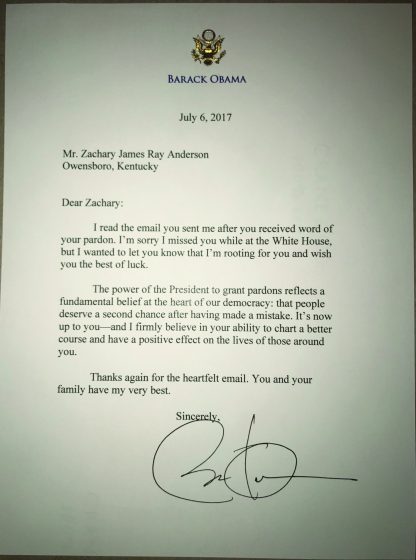 In late 2016, the FBI contacted Anderson’s character witnesses and his neighbors before bringing him into the Owensboro FBI office for a long interview.

“The FBI agent told me he had never seen one get this far before,” Anderson said, “And in Owensboro, he had never had one come across his desk. Then I kind of waited.”

On Jan. 17, he found out he was one of 64 people President Obama decided to pardon as his term ended. It will take a few months for the pardon to get through the system, and he looks forward to registering to vote and purchasing a firearm later this year.

Anderson said he wouldn’t change anything about how his life has gone, since these experiences made him into the man he is today.

“God pardoned me a long time ago, but then He followed it up with a second pardon from the president of the United States. I feel totally free from everything.”