Owensboro toymaker Clyde Fogle is giving Santa a run for his money. Over the last twelve years, Fogle has made 144,000 wooden toys in his backyard wood shop and given them away to children all over the world, in over 80 countries, through Operation Christmas Child.

On the back wall of his dusty workshop, just beyond the bandsaws, drills, and sanders, hangs a map that has a pin in it for every country where his toys have been delivered. Most of the pins are in Central America and Africa, but it’s an impressive visual to see how far his toys have traveled. 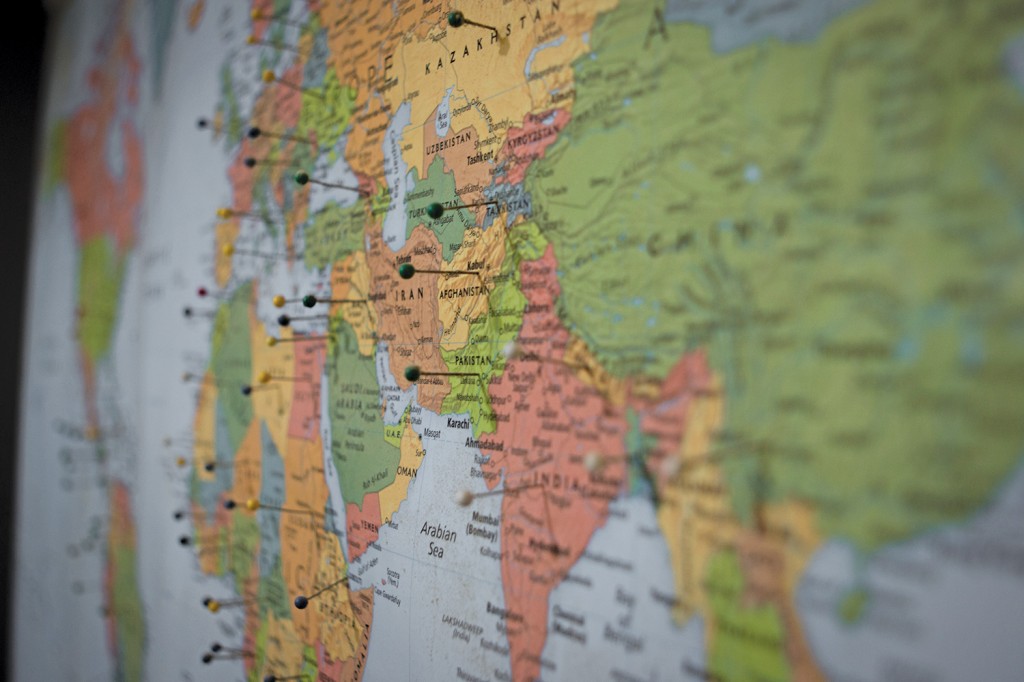 It all began when Fogle retired in 1997. One day, he was moving a piece of furniture up a staircase, which was pretty cumbersome for a man with muscular dystrophy and leg braces on his ankles, when he decided it was time to do something else.

“I’ve always been interested in woodworking, but I was mostly making cabinets and furniture. But then I noticed an article in a woodworking catalogue about a kit you could order that had enough material to make 100 small cars.” Fogle tried his hand at the cars and decided to send them with his friends, David and Judy Heady, who were missionaries in Haiti through Global Outreach. Of course, those children in Haiti were thrilled to receive the cars, and a spark was lit in Fogle.

After praying about what to do next, some friends suggested he should contact Operation Christmas Child, an organization run by Samaritan’s Purse that delivers shoeboxes filled with goodies to children in Third World countries. “Those who have seen them hand out the shoeboxes to the kids say it’s priceless to witness the joy and happiness on those kids’ faces,” Fogle said. “They just squeal they’re so happy.”

The toy that Clyde makes most often is a little pocket car. He buys the wheels pre-made in bags of 5,000. Then he traces, cuts out, and sands the car bodies, snaps the wheels on the axles, and assembles them on the cars. His favorite body style is what he calls the “little ‘vette,” but he also makes a slick-looking drag car. Helicopters with spinning propellers are another favorite of his to make. Fogle has recently perfected a Hummer-style jeep with drilled headlights and carved-out fenders. For the girls, he makes little figurines they can use to play “house.” 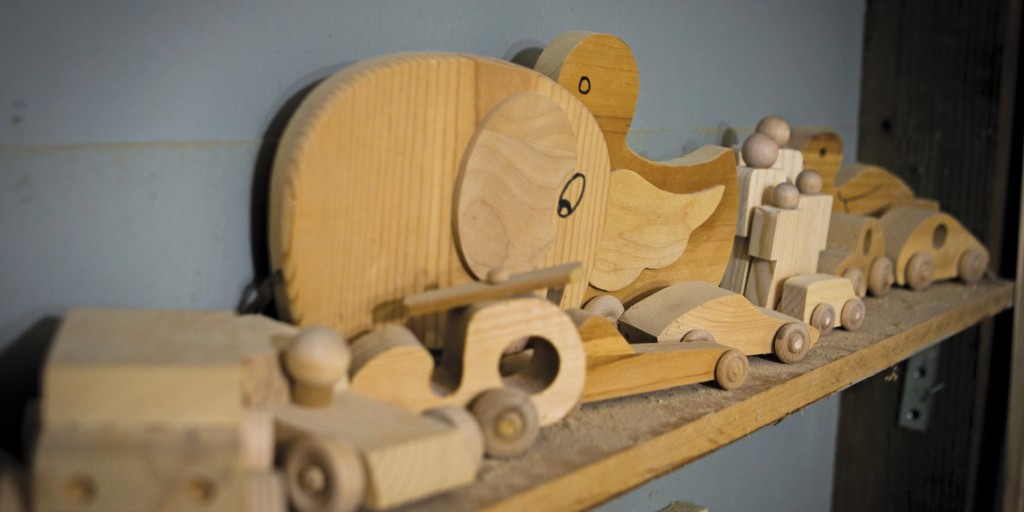 Charlotte, North Carolina is the closest distribution center for Operation Christmas Child. Once a year, they’ll send a truck to Clyde’s house. “Whenever I get a pallet full of toys ready, I’ll send them an email, and a few days later there’s an Estes truck backing a 35-foot container into my driveway.” After Christmas, they’ll also send Fogle an email, telling him where his toys ended up.

Owensboro Christian Church is Daviess County’s drop-off point for shoeboxes for Operation Christmas Child. “As a regional collection center, we cover from Crittenden County over to Hancock County and down to Muhlenberg County,” says Owensboro Christian Children’s Director, Emily Leach. “People either pick up boxes from us to pack, or pack their own boxes and bring them to us. My job is to package the shoeboxes in larger boxes.” Those boxes are loaded on two tractor-trailers and taken to the processing center in North Carolina for repacking and shipping to Third World countries.

Operation Christmas Child’s website says they ship the shoeboxes by plane, train, truck, boat, canoe, or even camels. At the end of the line, a church leader in each village receives the boxes and is in charge of distributing them to the children in the community.

How much joy can one shoebox bring? Ask the one hundred million children around the world who have received a shoebox full of goodies at Christmastime through Operation Christmas Child. Typically, the boxes contain toys, clothes, toiletries, and school supplies. Many of those children get one of Fogle’s toys, made right here in Owensboro. One of Fogle’s prized possessions is a picture of a boy in Peru, holding one of Fogle’s wooden toys from a box the boy had just opened.

Fogle has never sought recognition for his efforts, but word has gotten out. Samaritan’s Purse produced a promotional video for Operation Christmas Child that featured Fogle making toys in his shop. CNN found out about it, and aptly called Fogle “Kentucky’s Santa Claus.” That story was picked up by a Louisville station and WFIE News 14 featured it as well. But I wouldn’t call him comfortable with the attention. “The only reason I agree to do interviews is I hope that it might inspire someone else,” said Fogle.

One man from Arizona contacted Fogle last week after he heard about the shoeboxes from a missionary visiting their church. After talking with Fogle, the man has already ordered materials to start making toys himself.

David Colburn, who started out doing yard work at Fogle’s house, has become his apprentice. “I’d be out working in the yard and see him in the shop all the time,” Colburn said. Eventually, he asked what Fogle was up to. “Once he showed me what he was doing, I kind of got the itch for it.” Fogle called Colburn a pretty fast learner. Right now, he’s working on a doll chair for his two-year-old daughter, but he says he’d be honored to carry on Fogle’s toy-making legacy. 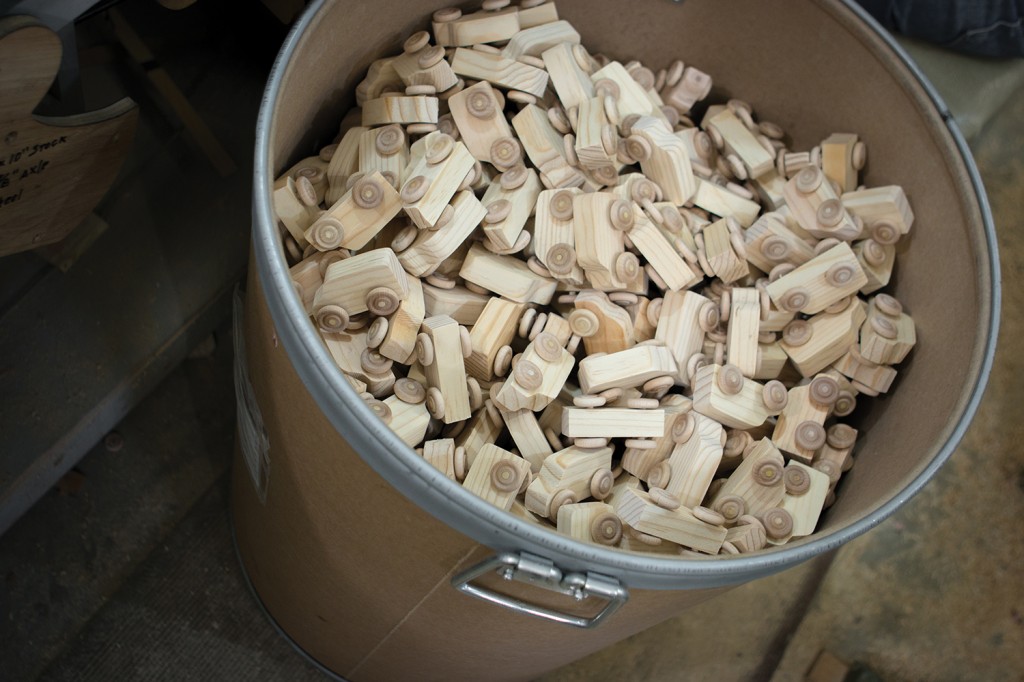 For now, the legacy lives on. As he answered my questions, Fogle dropped another pocket car into a barrel next to his work bench. “That makes about 600. A full barrel will hold close to 1,500.” He has slowed down a little bit this past year though, dropping from about 50 hours a week down to 35 hours. “My wife and my doctor both told me I needed to cut back some,” he smiled. “Plus, I’m 74.”

For more information about Operation Christmas Child, visit www.samaritanspurse.org. Collection week was Nov 17-24, but to get involved in next year’s shoebox collection, contact Emily Leach at Owensboro Christian Church.