Tisha Ziemer still has a photo of her son, Corey, then 2, scribbling all over the tub and bathroom wall with tub crayons. A toddler drawing on walls is pretty commonplace, to which most parents can attest. But what caught Tisha’s eye was the fact that Corey used all the colors, not just one. In his little mind, she could tell it was a work of art.

Corey was diagnosed with autism at age 2, and didn’t talk until he was nearly 6 years old, so he relied on drawing pictures to communicate with his parents, starting with basic shapes and stick figures. But over the years, Corey’s drawings became more detailed.

“We didn’t think much of it,” Tisha remembers, “because it’s just what Corey did. He drew all the time.” Cartoon characters. Things he saw on TV. Scenes from movies. Animals and scenes as he got older.

Then about five years ago, Tisha says other people began to notice Corey’s talent. Several people commented that Corey should start drawing cards like you see in Hallmark. 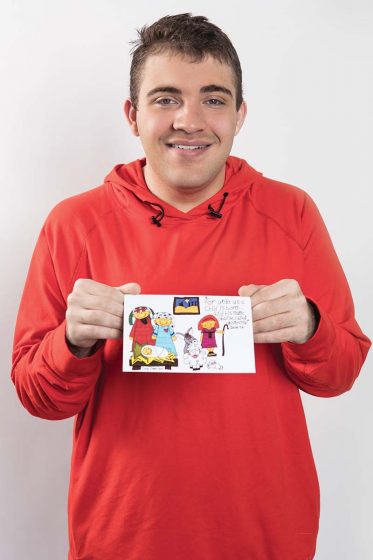 Now as a senior at Apollo High School, with graduation looming at the end of this academic year, Corey’s parents decided it was time to start looking toward Corey’s future, and “Corey’s Heart and Soul Designs” was born. “Corey is always going to have autism. But he’s also always going to have this talent. It gives us peace as parents knowing that he has something to do that he truly enjoys and that blesses other people.”

Corey’s Heart and Soul Designs was started as a way to use Corey’s talent for drawing to earn income that will be directed into a special needs trust fund to sustain Corey in the future.

In September, the Ziemers launched what they were considering a pilot project, selling one of Corey’s hand-drawn Christmas card designs in packs of 10. Tisha ordered 200 cards, prayed, and posted an announcement on Facebook.

That led to 1,000 pre-sale orders from that one post. “It was crazy. Unexpected. Such a blessing,” Tisha said with a smile in her voice. But she says what happened next was even more unexpected. One day, Tisha was sitting in the parking lot of Owensboro Christian Church praying about what to do next. When she looked up, she saw Crazy Me Gifts & Apparel.

Donna Southard, the owner of Crazy Me, immediately took an interest in the cards, and then went “above and beyond” as Tisha put it. Southard invited Corey to appear in the store for Crazy Me’s Christmas open house on November 11 to sign and sell his Christmas cards. When the Ziemers arrived, the entire Crazy Me staff was wearing shirts with Corey’s Nativity design on them, which they also had extra to sell.

The push from Crazy Me resulted in another 1,000 cards sold, plus shirts. Crazy Me is now the exclusive boutique location to purchase Corey’s Heart and Soul Design cards and shirts in Owensboro. “The ladies there are so welcoming. They make us feel like family,” Tisha said.

As it turns out, having Corey in the store was a good thing for Crazy Me, too. Donna Southard says Corey’s cards were the #1 seller at the Christmas open house. “Corey has a tremendous impact on people,” Southard said. “The Ziemer family really touched my heart, and I’m so glad our store had the opportunity to bring a little bit of awareness to our community about autism.”

The inspiration for the Nativity design came from Corey’s longtime fascination with Bible stories. Tisha says she’s been reading Bible stories to Corey since he was a baby, and he always loved the Christmas story.  When Corey was 7 years old, she once found him filming his own rendition of the story with the Nativity figurines.

As for the future of Corey’s Heart and Soul Designs, Tisha says Corey hopes to expand his card designs to include other cards, paintings, and art projects.

But beyond the cards, Tisha hopes Corey’s Heart and Soul Designs can help inspire other parents of children with autism. “One of the things about having Corey do signings is that people are appreciative to hear his story and meet him. We’ve come a long way in our society with acceptance and fairness to those with autism. We want to focus on Corey’s abilities, for him to become more independent, be productive to society, learn how to present himself to people, feel pride and gain self-confidence, to grow and thrive, be healthy and be happy. We want the same thing as any other parent, but the challenge is very real when you have autism. And we hope that telling Corey’s story gives other families hope, because he has progressed miraculously over the years.”

If you’re interested in purchasing Corey’s Christmas cards and shirts, you can find them at Crazy Me Gifts and Apparel, which is located at 277 Williamsburg Square.

The Story Behind St. Nicholas

Financial Blueprint for the Holidays