A Woman with a Plan

by Ashley Sorce-Wedding
in Features
0
0

As a self-described Type-A personality, Kelsey Mann Peacock, 29, lives by a planner. In fact, she recently sorted through and organized some boxes she received from her parents and found planners dating back to the eighth grade.

But in all those years, Kelsey never seemed to find a planner that fit her needs.

“I could just never understand every year when I would go to buy one, I would use it for maybe six months and then I would just go buy a different one because I didn’t like it,” Kelsey said. “I just felt like every time I went to get something out of my purse, or better yet, when my husband would go to get something out of my purse, I just had paper everywhere. I always had my planner with me. But then I would have grocery lists or to-do lists or all of these lists separate because I never had space to fit it in a planner.”

Unable to find a planner that combined all of those lists, and tired of spending money on planners that didn’t work for her lifestyle, Kelsey finally said to herself, “If no one is going to make it, I’m just going to find a way to make it myself.”

Kelsey, an investment analyst and financial planner, had a lot to learn about the paper and stationary business, but she jumped in feet first.

In April, she began by writing all of her thoughts and notes out on poster board spread out across her house. She looked at all those planners she had saved over the years. She analyzed the cost, time and investment she and her husband, Jared, were willing to make. 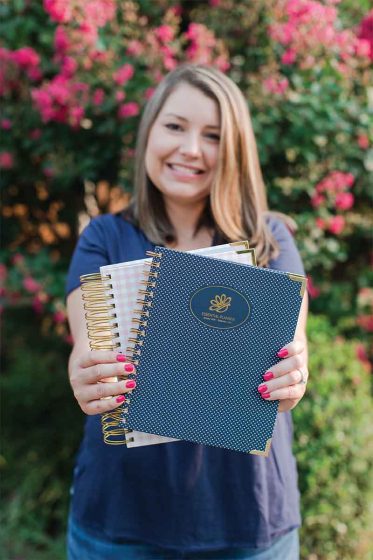 Through this, Kelsey created The Essential Planner to be sold under her new business, Peacock Paper & Gifts. She wanted to design a line of both daily and weekly planners that would include space for daily planning, healthy checks, budgeting, meal planning, grocery lists, travel planning and more.

Her next step was reaching out to a sorority sister who runs a project management firm. She helped Kelsey source the planner, ultimately finding a manufacturer that worked best for Kelsey’s product. Finally, Kelsey worked with a graphic designer to help design the planner layout, page by page.

The last phase was proofing. “It was probably one of the top 10 most stressful times in my life,” Kelsey said. “You know you’re investing all of this money. If it comes out wrong, it’s your own fault, because you didn’t catch it.”

After proofing was complete and edits were made, Kelsey began production. She based her order off of presales from her website and ordered extra to sell through the holiday season.

“I have been blown away by the positivity and the support of our community,” Kelsey said. “Obviously we have a ton of growing to do, but I will say the positivity of the women in Owensboro has been very fulfilling to me to know that people are excited about this product.”

Kelsey just recently added The Essential Planner on Amazon, where sales have continued to grow, including sales to customers in Canada and Australia. Kelsey’s website was originally set up to only ship in just US, but with demand growing from other countries, she quickly changed her shipping policy.

“I was just blown away,” Kelsey said. “It was mind boggling to me. Somebody in Australia wants one of my planners? They are willing to pay the shipping? The shipping costs more than the planner. But that just reinforced to me that there was really a need for these planners.”

Despite the successful sales, Kelsey was receiving feedback from potential customers through her website and social media that while they loved the planners, the cost was just too high.

“That just broke my heart,” Kelsey said. “I never set out to create a product that any woman couldn’t afford. When I called it the Essential Planner, I wanted it to just be a place that women had to go for their essential things. I never set out to create something that had a dividing margin to where some people could afford it and some people couldn’t.”

After doing market research, Kelsey said there were plenty of planner companies that sold planners for more than her original cost. “I just felt this pressure that I had to sell at this certain price or people aren’t going to think we are a legitimate company. And that was really the reason we set the prices there. I didn’t feel like I needed to set the prices there for us to be profitable. I just felt that if people saw that we were selling our planners for cheaper, they would think there is something wrong with our quality.”

With this weighing on her heart, Kelsey prayed, talked with her husband, researched profit margin analysis, and decided to reduce her prices. Not only did she feel as though she was doing the right thing, but she saw a spike in sales immediately thereafter. She has now gone a step further and refunded customers who had previously purchased The Essential Planner at the higher cost.

“I think women in business need to talk about the challenges more often,” Kelsey said.  When she hoped to start her business, Kelsey looked at social media for research and market comparison. “Instagram isn’t instant pictures; it’s curated photos that are planned out months in advance. So when I saw similar companies, I thought I had to do these things this one way because so-and-so does that and they are really successful.”

But the quality of The Essential Planner can’t be disputed. Kelsey’s sales and community support have proven that. And while this planner has been a labor of love for Kelsey, it has also taught her a lot about creating a product, and about herself as a woman in business.

A Gift with Meaning

A Woman with a Plan