Even in the hottest part of the day (the temperature hit the mid 90’s Saturday afternoon), die-hard fans were still dancing at the front of the main stage.

Just behind them were row after row of lawn chairs, although many of them sat as empty placeholders.

Behind the rows of chairs, several people threw frisbees in the green space that will surely be filled as night falls and the crowd swells to hear Old Crow Medicine Show and Sam Bush Band Saturday night.

And just beyond the impromptu frisbee field, at the top of the ridge, lies canopy row.  Getting the very best of those coveted spots meant showing up Wednesday morning for the “canopy run,” where early birds raced across the field to claim their canopy spot.

But Saturday afternoon, beneath the midday sun, those who didn’t bring their own shade (like the canopy row dwellers) found relief in the shade of the trees that line the field overlooking the stage. Most of those trees held several hammocks, which were prime locations for hanging out and listening to the music.

Many people beat the heat by splashing in the spray park, or riding the trolley to tour the International Bluegrass Music Museum, or catching a songwriting workshop in a covered shelter house in the Pioneer Village.

Several found their way to the “kid zone,” which was also in a shelter house, conveniently next to the playground by the spray park. When I stopped by the kid zone, there was a musician on stage leading a group of young harmonica players in a jam session, each taking their turn for a short solo on a lowered microphone.

Others retreated to their campsite or RV for a siesta. The family-friendly campground, for example, is tucked away in a very quiet and shady nook in the back of Yellow Creek park.

Based on presales, organizers say they expect a record crowd for Saturday night’s headliners. “We won’t know a final count until Monday or Tuesday, but sales are up this year,” said Chris Langdon, IBMM Promotions Director, while taking a break in the volunteer registration shelter house. “And Saturday night is generally the biggest night.”

Langdon said around 170 volunteers help throughout the festival, typically taking four-hour shifts. “So far, everything is running pretty smooth. Many of our volunteers have been here five years or more, so there are parts (of the festival) that run like a well-oiled machine. Everyone works together really well and we have a lot of fun with it.”

Every year, ROMP tries subtle changes to make the experience better for the fans. This year, for example, they moved the craft vendors right next to the food vendors to make one central marketplace area.

“We’ve seen steady increases every year,” Langdon concluded. “It’s a neat combination of brand new faces and some of the same old faces too. It’s such a cool blessing to be a part of this team.” 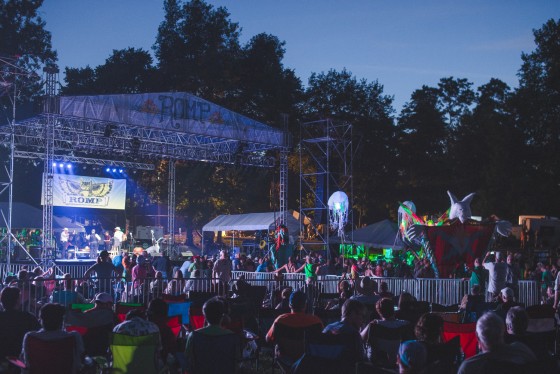