Brescia University welcomes alumni Sister Michelle Morek, OSU ‘66 as the featured speaker for the “Return to the Arch” Alumni Speaker Series on Thursday, October 26th at 7:00 pm at Taylor Lecture Hall. Morek spent five years coordinating UNANIMA International in New York City, a coalition of 21 congregations of women religious advocating as a non-governmental organization at the United Nations where she became involved in anti-human trafficking efforts. She will be joined in her talk by Alex Satterfield, a current student at Brescia University who interned with Morek in New York and who is also actively involved in the efforts to fight human-trafficking here and around the world.

Morek is an Ursuline Sister of Mount Saint Joseph, Kentucky. After receiving a doctorate in biology from the University of Notre Dame she worked for 32 years as a professor and administrator at Brescia University. She also served for 14 years in congregational leadership positions, including six years as Ursuline community leader. 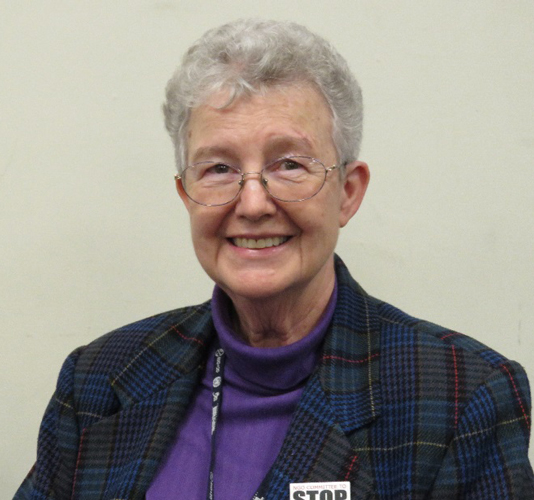 Her present position involves writing, editing, and networking for Global Sisters Report, a project of the National Catholic Reporter in Kansas City. She has received several awards for teaching, and has been honored for her volunteer work in environmental issues.

Morek was designated a Brescia University Distinguished Alumna in 2012 This is the highest award bestowed by Brescia University to an alum and was created to honor those Brescia University graduates who exemplify in their lives the elements that comprise The Brescia Difference: Respect for the Sacred, Devotion to Learning, Commitment to Growth in Virtue, and Promotion of Servant Leadership.

Satterfield is a junior from Owensboro, Kentucky who graduated from Apollo High School. She is majoring in pre-law and psychology with plans to work in the world of non-profit.

During the summer of 2016, Alex worked in New York City as an intern with Morek for UNANIMA International where she became very involved in anti-human trafficking efforts. She also had the opportunity to be the UNANIMA representative on the floor of the United Nations during her tenure.

In the summer of 2017, Alex spent three weeks in Cebu City, Philippines interning with Redeeming Zoe, a non-profit organization committed to fighting sexual exploitation of children in the Philippines.

Morek will be speaking on her work involving human trafficking and her time with UNANIMA and working with the United Nations to advocate on the behalf of women and children (particularly those living in poverty), immigrants and refugees, and the environment. Satterfield will share her experiences in working with UNANIMA and Redeeming Zoe.

For more information regarding Homecoming festivities or to register for events, visit www.brescia.edu or contact Stephanie Walll at 270-686-2101 or [email protected].

New Traffic Signal on 54 To Be Activated Thursday