The City of Owensboro will be hosting their annual Holiday Stroll on Saturday, December 3rd from 1-8pm in downtown Owensboro. The afternoon will include downtown shopping and dining, Christmas carolers, ice carving demonstrations, photos with Santa, and the Smothers Park tree lighting at 5pm.

Returning in 2016 is the second annual Elf on the Shelf Scavenger Hunt. Registration for the scavenger hunt will be at the Owensboro-Daviess County Convention and Visitors Bureau located at 215 E. 2nd Street beginning at 1:00pm. Participants will search for elves hidden throughout downtown Owensboro and the grand prize winner will receive a Nashville weekend getaway for two, including hotel for two nights and two tickets to “How the Grinch Stole Christmas!” Musical at the Grand Ole Opry House.

2nd Street from Daviess Street to Frederica Street will be closed from noon until approximately 8pm for the event. 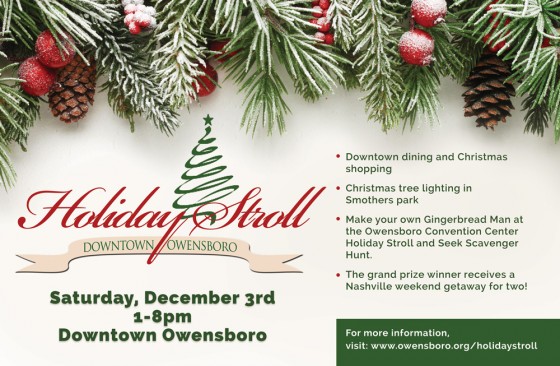