On Sunday, September 13, 2015 at approximately 10:20 P.M CST, Trooper Joseph Cameron Ponder conducted a traffic stop on Interstate 24 around the 58 mile marker westbound. After making contact with the driver, the vehicle fled from the stop. A pursuit ensued with the suspect stopping abruptly around the 49 mile marker, causing the front of Trooper Ponder’s police cruiser to make contact with the rear of the suspect vehicle. At this time, the driver of the suspect vehicle fired several shots into the police cruiser striking the hood, windshield and Trooper Ponder multiple times. The suspect fled the scene on foot. 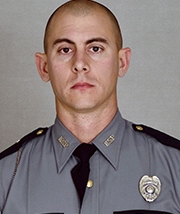 Trooper Ponder was transported via ambulance to the Caldwell Medical Center in Princeton, KY where he succumbed to his injuries at 11:41 P.M. CST.

On Monday, September 14 at approximately 7:00 A.M CST, KSP Troopers located Johnson-Shanks in a wooded area in close proximity to Interstate 24. Upon making contact with Johnson-Shanks, Troopers of the Special Response Team (SRT) observed him with a firearm and instructed him to relinquish it. Johnson-Shanks refused verbal commands and aimed the weapon at the Troopers. An SRT Trooper discharged his agency issued weapon striking Johnson-Shanks. He was transported via ambulance to the Caldwell Medical Center in Princeton, KY for treatment where he later succumbed to his injuries at 08:23 A.M. CST.

Gov. Beshear released this Statement on the Death of Trooper Ponder:

“Jane and I are deeply saddened by the death of Trooper Ponder. Senseless acts like this are a tragic reminder of the risks that our law enforcement officers face every day, just by putting on their uniform and doing their job. That he was killed in the line of duty makes his death memorable, but we must never forget the most significant part of Trooper Joseph Cameron Ponder’s story – how he lived, his selfless service to others, and his willingness to give his life for that commitment.” – Gov. Steve Beshear

What's Next for the Air Show?