Former Owensboro Pastor to Perform on NBC’s The Voice Tonight

Owensboro Living spoke with David Walker, who played in the worship band at BridgePointe with Kaleb and remains close to the aspiring artist today.

“The first time I heard him sing, my eyes lit up,” David said. “He had a really special talent both as a singer and guitar player.”

Scharmahorn left BridgePointe in 2010 for another worship position in Ormond Beach, Florida, according to Walker. “Kaleb has always put family first,” Walker said. Kaleb and his wife, Meagan, have three children — two daughters and a son.

“This is a good time to pursue this opportunity. It’s long overdue and he is very deserving,” David said.

Fans can follow Kaleb’s journey on his Facebook page, Kaleb Lee, where he announced his audition for The Voice earlier this month. Video of first-time judge Kelly Clarkson’s Today Show interview has been spreading among Owensboro Facebook users today because Kaleb’s audition can be seen. In the footage Kaleb is on stage with his wife and three children — could this be a positive sign that he makes it through the blind auditions?

Be sure to tune in to The Voice tonight at 7 p.m. to cheer on Owensboro’s Kaleb Scharmahorn! 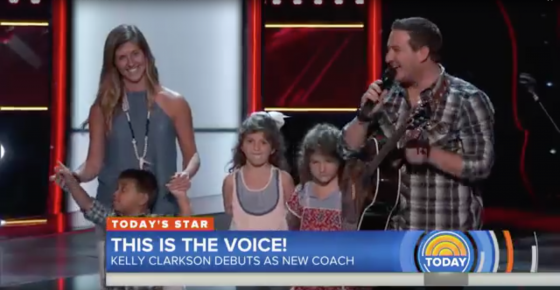 Former Owensboro Pastor to Perform on NBC’s The Voice Tonight