Students at Daviess County High School were interrupted by flashing lights and sirens this morning as a “Ghost Out” was held in the back parking lot, even in the drizzling rain.

Ghost Out is an anti-impaired driving program conducted every year by Owensboro Health where a mock crash scene is set up at a local high school. Random students are chosen to be mock victims in the crash. 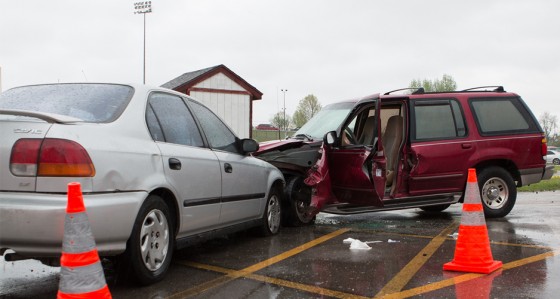 EMS, Fire/Rescue, and police responded just as they would for a real accident. If it had not been raining this morning, a medical helicopter would have landed as well.

The mock victims, Meredith Payne and Joy Beth Whitmer, were then taken to the Emergency Department at Owensboro Health Regional Hospital for “admission” as the trauma care team acted out the entire scenario with trauma nurses, physicians, and surgeons.

Lying in the back of the ambulance while waiting on the bus load of student witnesses to arrive, Payne and Whitmer were not enjoying the experience. “I’m panicking right now,” Whitmer said, as EMT, Sarah Wimsatt, and Paramedic, Dinah Chapman, prepared her for transport. 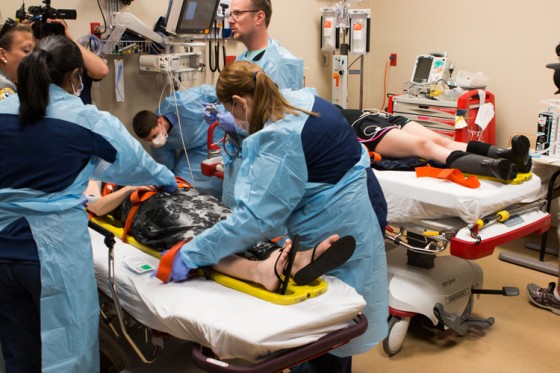 “I’m pretty stressed out,” Payne echoed. “This is really intense. It’s shocking. But I think they plan it this way to show us how all this goes.”

After the Emergency Department, the selected students were taken on a tour of the Owensboro Police  Department and the courthouse, which did not bode well for mock “impaired driver,” Tyler Boling.

The entire experience was processed at the end of the day and concluded with a school assembly where speakers who have experienced a death in the family due to impaired driving addressed the crowd.

“Our hope is that the students will understand the consequences of driving impaired,” said Jason Stiles, Director of Trauma Services at Owensboro Health Regional Hospital. “In trauma, we see too often the devastating effects on the patient’s families when they are killed in a wreck involving impaired driving. Impaired driving is preventable and that is why we host this program. Our day is a success if only one student will choose not to drive impaired.”

Live on the Banks Returns