Coffee With a Conductor

It’s been a whirlwind week for Daniel Black, the first of four conductors being considered to become the next conductor for the Owensboro Symphony Orchestra.

His week started with two rehearsals with the OSO in preparation for Saturday night’s season premier. Yesterday he made two school visits to Sutton Elementary and Owensboro Community and Technical College. Last night, he enjoyed his first ever taste of smoked barbecue turkey and is looking forward to dining at Moonlite tonight.

This morning, Black took part in a light-hearted question and answer session in front of nearly 40  people who gathered for “Coffee with a Conductor” at the Symphony Academy building.

“We’re just trying to come up with a new way to engage the community with the process (of choosing a new conductor),” explained OSO CEO, Dan Griffith. During the search, the community will be able to meet each of the four conductor finalists as they are in town to conduct a performance with OSO.

Chad Benefield emceed with QnA session with Black, while those in attendance sipped Starbuck’s coffee donated by the Frederica Street location and breakfast sandwiches provided by the conductor search sponsor, Specialty Foods Group.

Daniel looked completely at ease addressing questions about his childhood, his lifelong passion for music, what the audience can expect Saturday night, and some completely off-the-wall questions thrown in for fun.

He recalled accounts of coming up with songs in his head on the playground as a young boy.  “I thought everybody wrote songs in their head on the merry-go-round,” he said. He recounted listening to  overtures to get himself pumped up for soccer games as a 7- or 8-year-old. That, too, he thought was completely normal. 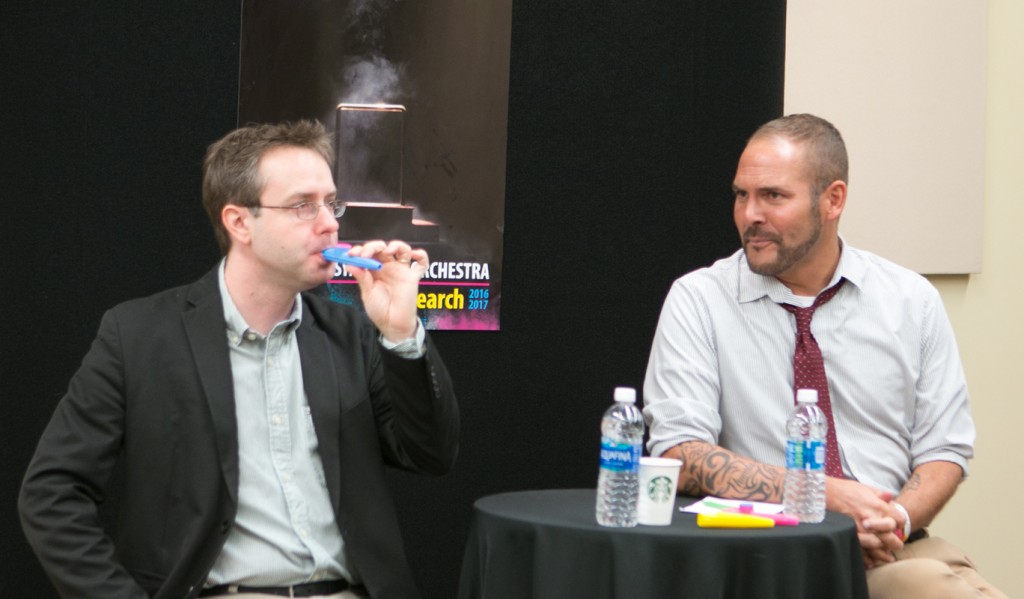 To give an impromptu preview of Saturday night’s performance, Benefield handed Daniel a kazoo and asked him for a rendition of Beethoven’s Symphony No.7, which Black chose for Saturday’s OSO performance. Without missing a beat, Black buzzed off a few familiar measures to the applause of the laughing crowd.

They then discussed another piece, “Mothership” by Mason Bates, which will also be performed at Saturday’s opening night. Black says Bates used his eclectic background as a DJ when writing the piece. “It has a techno feel to it and incorporates the blues with a few improvised solos, so it will be very interesting,” Black said.

Benefield ended the session with a barrage of “this or that” questions. Just for fun, I’ll include some of them here:

To close the first Coffee with a Conductor series, in the spirit of election season, Black was asked to give his “campaign slogan” for “running” for becoming the new conductor.