The cost for the lighted tour is $3 per vehicle (including buses and vans), which is divided between the Daviess County Parks Department and five local non-profits who each agree to provide volunteers to work the admission booth during their assigned week. So far, over $41,000 has been donated to local non-profit agencies.

Free wagons rides are also available each night, so warm dress is recommended.

“Christmas at Panther Creek was developed to introduce Daviess County residents to the park,” says Daviess County Fiscal Court Parks Director, Ross Leigh. “The park had been in existence for a number of years but many people weren’t aware of where it was located.”

Mission accomplished! The attraction has become an annual Holiday tradition for many Owensboro/Daviess County families. On average, 3,500 cars tour the lighted park each Holiday season.  Ross estimates that over 100,000 have seen the lights since 2003.

That first year, Daviess County Fiscal Court provided the materials and utilized volunteer labor provided by the local I.B.E.W. to install the initial infrastructure. Christmas at Panther Creek was opened that November, making this the 13th year of the program.

Originally, over 70 sponsors assisted in purchasing the lighted displays.  Jeff Ebelhar, a CPA at Ebelhar Whitehead, is both a family and corporate display sponsor.  Ebelhar’s parents supplied the “country Christmas” display, which features a farm scene with a silo, tractor and barn.  “My mother really loved Christmas, and my dad loved the farm.  So they decided to make that display as a gift to the area that people could enjoy for years to come,” Jeff said.  Eventually, Ebelhar’s CPA firm also sponsored a display because it is “a nice, community effort that also helps local charities.” 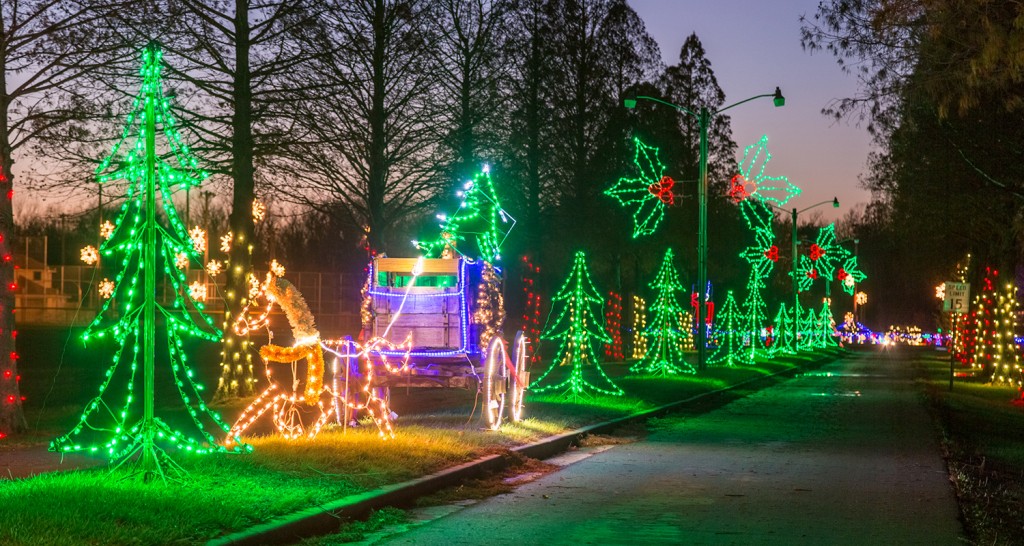 The annual Holiday attraction continues to grow and evolve. 87 snowflakes were added around the ball diamonds, as well as additional lighting along the park’s boulevard entrance. A 70 ft tall lighted Christmas “tree” stands by the fire tower. An 8 ft teddy bear and Santa Express Train have been added for this season.

Applications for non-profits are available in September of each year, and non-profits can call the office to put their name on a list to receive the next available application at any time. Each year, five non-profits are selected.  Their portion of the money collected from admissions is split evenly among the five.

Eric Miller, with Western KY Raptor Center, which has been selected several years, said, “Christmas at Panther Creek is an awesome way to raise money. We typically make between $700-800 for the week.”  Sometimes, people will make extra donations to help the cause as well.

Additional display sponsors are always welcome and can be arranged by contacting the Daviess County Parks office at 270-685-6142.

Arrests Made in Eight Theft Cases in Owensboro Subdivisions