Putting the Jam in Jamboree

Jamboree – a noun, defined as “a large party or celebration with music or entertainment.” The Lanham Brothers, Randy and Barry have found a way to breathe new life into this concept and take it to a whole new level, while embracing their roots of fiddle playing and dance. 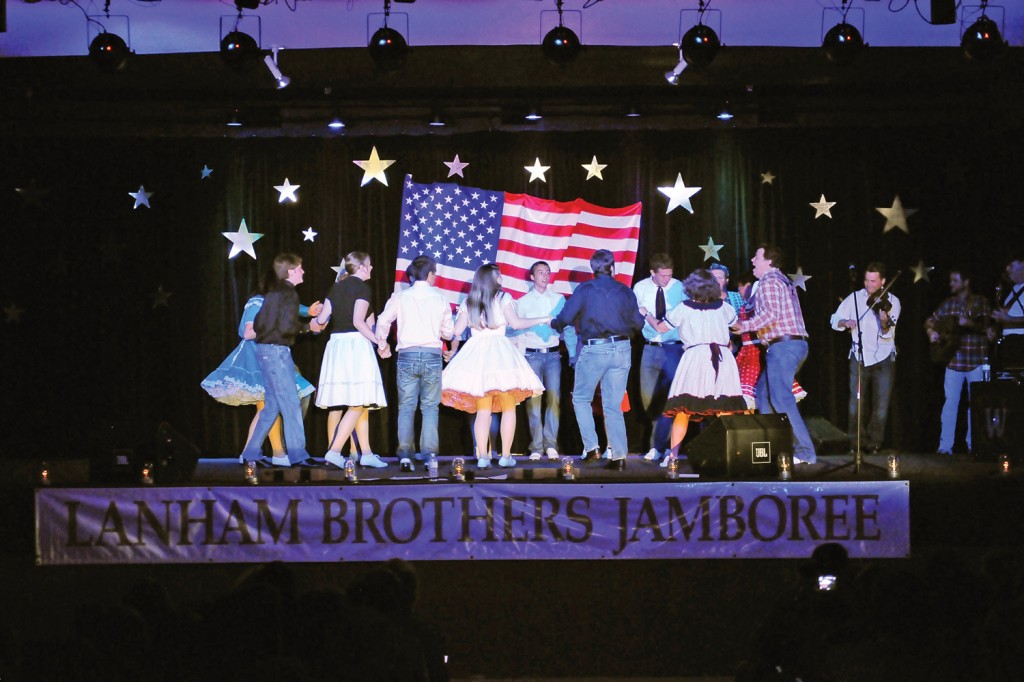 In an age where parents struggle to find clean music for their children to listen to and good wholesome entertainment for their families to share, the Lanham Brothers Jamboree offers all of that and more within a 20-minute drive of downtown Owensboro. Even more, the Lanham Brothers provide such a unique and engaging experience that they draw audience members from all areas of the tri-state.

The first Lanham Brothers show was inspired by “Aunt Peg’s” (Peggy Williams) desire to have a fundraising event to benefit the Family Resource Center in Muhlenberg County some seven years ago. Even though Randy and Barry had taught together in various student settings, they had never performed together up until this point. Aunt Peg had been inspired by other variety shows that she had seen in Nashville, which featured different offerings of bluegrass and gospel music, clogging to 50’s melodies, and crowd interaction that was infused with a bit of comedy. After that first fundraising show, the idea for the Lanham Brothers Jamboree was born. Now in its sixth year at the Diamond Lakes Resort, the Jamboree continues to boast that it offers its audiences a different experience at every show. Barry and Randy take great pride in the fact that they have “never repeated a show and never have the same line-up.” They strive to be creative with each performance so that both the regular attendee and the newcomer have an exciting and meaningful experience. The one component that does remain consistent is that Randy, Barry, and the band are present and coordinate all aspects of production.

As far as the show itself, you really never know what you might see or “when you are going to be a part of the show.” Randy shared that he loves “how our show flows,” providing variety in the lineup, as well as in the interaction. A guest artist never performs more than 2-3 songs in a row so that the show does not lose momentum. After the guest performance, the dancers come on stage, another guest performs, and the crowd is engaged through skits. Both gentlemen agree that there are few things that are more entertaining than family and friends laughing at their precious child or 85-year-old grandmother participating in the show.

When asked if they ever felt that their show was old-fashioned or outdated, Randy said, “It’s the cool thing because it’s not the cool thing.” He then stressed that it wasn’t change that he minded, as long as the tradition continues to be passed down. It was their Granddad who gave Randy his first fiddle, took them to campground “jam sessions,” and taught them the importance of keeping tradition alive. John Lanham, now 89 years of age, can still be found in his basement having “jam sessions,” and, if you are lucky, you might just catch a glimpse of him playing in a show. One reason that Granddad may still be so active in playing is that he still firmly believes to this day that “playing music is the best medicine you can have.” There must be something to that theory because Randy admits that he has “never met anyone that loves to make music the way he does.”

Randy and Barry are two of seven siblings who were immersed in music at a very young age. While there were fiddle players on both sides of their family, they can recall when they were growing up, that every family member either danced or played an instrument. This early exposure to music influenced the brothers in different ways. Randy, who started playing fiddle at age 11, left for Nashville at age 20 to pursue a career in music. Randy now draws from his professional music experience to instill the traditions of bluegrass music into our youth. Barry, who started clogging at age 17, works as a real estate developer and chose not to make a career of dance. Randy, however, will proudly contest that there is “no doubt in my mind that he and his team could be dancing on the Opry (stage) right now.” Barry works diligently at his “second full time job,” as the only clogging instructor in Western Kentucky. He still feels that clogging is much more of a calling than a hobby and often prepares weeks and months in advance for performances. Both Randy and Barry are incredibly attentive to their students’ needs and go above and beyond to give their students a complete music experience. If a student brings in a new song that they want to learn on fiddle or mandolin, Randy will research it on YouTube and write the music using tablature. Barry will record and personalize songs for his clogging students to take home and practice, often incorporating hip-hop or other genres that perk his students’ interests. Both instructors are eager to find out what is current from the younger players and dancers as they are driven by the new trends in Bluegrass music.

There is no doubt that both brothers have an incredible heart for young people. After all, that is what drew them to become instructors for the “Arts in the A.M.” program at the RiverPark Center and into our schools to share the history of Appalachian music with thousands of students. So it comes as no surprise that the Lanham Brothers Jamboree would “use youth in every show” as a way to “show them off.” They are both so proud of the up and coming musical and dance talent that they have had the privilege of mentoring and instructing. They are so proud, in fact, that they now feel that it is time to “teach them how to teach.” High school seniors and Blackberry Jam members Emily Wills and Alexis Roby have made the transition from students to performers, to instructors through their experiences with the Lanham brothers. These girls have been inspired to take the sounds of bluegrass music that they grew up with and teach it to a whole new generation of students.

The Lanham Brothers Jamboree will kick off its new season on Saturday evening, April 12th with performances by Joe Christian, Annabelle Watts, and Skylar Cain. Also featured this season are Jenny Beth Willis, Wade Hayes, Kings Highway, Blackberry Jam, and Marty Brown. If you find that you just can’t wait until April, KET proudly airs the shows several times a month across the state of Kentucky. However, there truly is nothing like hearing the sound of that banjo or fiddle, watching young ladies be swung around by their partners, and maybe, just maybe winding up in the action yourself.

Ride of His Life