He’s known as “Dancing Guy” or “Happy Feet,” but you can just call him Tayvho.

I saw his backwards hat and sunglasses bouncing to the music from a block and a half away as I drove toward the Daviess County Public Library, where I was scheduled to meet Yayvis “Tayvho” Apkan for this interview. You’ve seen the “dancing guy,” right? I first saw him at the corner of Parrish and Frederica, but I’ve seen him on South Frederica and the 54 overpass, as well.

But he doesn’t call it “dancing;” he calls it “just doing my thing.” That’s partly because he’s never had dance lessons or any kind of training. It’s also because it’s not a routine. “I don’t know what I’m doing. I just feel it. I get really into the music and I move how I feel. It just happens. I’m just being me,” he explained.

Tayvho is home for the summer from the University of Kentucky, where he just finished his freshman year. But he also produces music as a hobby. So the beats he’s listening to in those earbuds are songs he produced himself using FL Studio “Fruit Loops” program on his computer. “I start with samples I like, then add a beat to it, and then throw in some sound effects, too. When it all comes together, it makes me so happy I just have to move!”

He let me listen to a song, and I gotta tell you, about 10 seconds in, and I was ready to dance, too!

Go ahead. Join in!

So right there on Frederica, he showed me some of his favorite moves. I learned the hand swoop thing that doesn’t have a name but looks like your arms are mimicking waves. It goes best with a head bob and a shoulder shrug. And he’s right. With those beats going, you just can’t help it.

Then there’s the “drive back” as he calls it. That’s where you throw your arm back like you’re pulling a gear shift and bounce backward on one leg. It’s ridiculous fun! The hand stand is another Tayvho favorite, but I didn’t try it. I’m too old for all that. (Tayvho is 19.)

Next was “the kick,” where you lean back, throw one arm straight out to balance, reach your other arm back to catch yourself with your palm and kick out with the other leg. Multiple times. Or switch legs. Or whatever you feel.

But the classic Tayvho move is what he calls the “Spongebob.” The best way I can describe it is fast crazy legs with arms gently swinging and doing the hand swoop thing.

So now that you know some of the basic moves, feel free to hop on in the next time you see him around town. 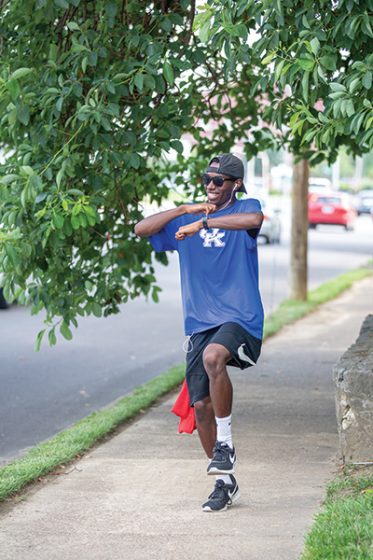 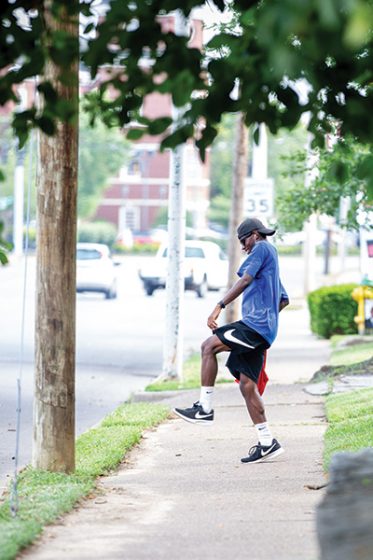 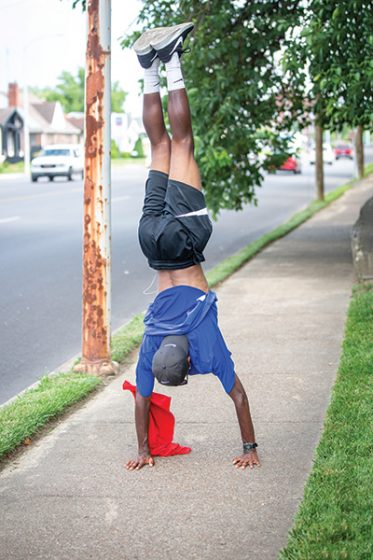 If you’re wondering why he walks everywhere, it’s because he doesn’t have a license. “I like exploring. I’d rather just walk and be outside,” he told me. But despite the fact that he dances—excuse me—does his own thing, along the busiest streets in Owensboro, Tayvho claims he doesn’t do it to get noticed. “People say they honk and yell but I can’t hear them most of the time because I’m just groovin’ to the music. The way I see it, I’m just using what God gave me. That’s the most important thing. And if that makes somebody else happy, then that’s cool, too!”

It clearly does. In addition to the honks and “thumbs up” as people drive by, Tayvho says other people joining him for some moves on the sidewalk is becoming more common as the summer rolls on. Kids. Adults. Whoever. A dance party broke out on the front lawn of Puzzle Pieces one day when Tayvho was walking by. That day, an AT&T Tech joined in, which WBKR’s Angel Welsh caught on video.

But his favorite reaction was from an Owensboro Police officer. “He stopped me to make sure I was okay. I think he thought I was on drugs or something. But then he asked me what I was listening to, and when I told him, he asked if he could listen. So I said ‘sure’ and handed him my earbuds.” Apparently the cop liked what he heard, because before he got back in his cruiser, he asked Tayvho for his playlist.

So where did this come from?

As a young boy here in Owensboro, Tayvho was into video games, cartoons and Dragon Ball Z. But in middle school, he changed it up and started getting into music. “I was a typical gamer, but I got tired of video games and started learning instruments in orchestra,” he explained. By high school, he started producing his own beats with Garage Band (a digital studio program) on his laptop. Now, he collaborates with other producers online to improve his craft.

So music has been Tayvho’s thing for a long time, but this street grooving thing came unexpectedly just a few months ago. “I was walking around Lexington one day, listening to my music, and I just started grooving. I was surprised, honestly, because I didn’t know I could (move like this) . I thought ‘this is fun’ and I’ve been doing it ever since.”

Growing up, he used to be a self-described “shy” kid that always blended in and didn’t seek attention. In high school, he dealt with loneliness and depression. But with this new form of expression, he’s becoming more outgoing and exudes happiness.
Will it ever stop?

This is where I have a hard time making sense of all this. Because whenever he is “doing his thing,” every head is turning. Some people drive back around to get a second look. People just don’t know what to think about a guy who spontaneously dances all over town. The media in Lexington and Owensboro have done stories about him because it’s different and interesting. He has basically positioned himself into mini-celebrity status. But he says he doesn’t do it for attention.

And beyond that, the music he’s listening to he created himself, which is why it makes him happy enough to break into dancing. Yet he has no intention to ever release it or allow anyone else to listen to it. Other than his producer friends.

Then, when I asked him what’s next in terms of music and dancing, he says he doesn’t think about it or really even care. “Producing music is fun, but I just do it for me. I’m not trying to make money off of it.”

He went on to say what he really wants to do is work with people with special needs. “Like working at a place like Puzzle Pieces. That’s what I really want to do, because I like helping people. I want to use what I’ve been through and what I’ve learned to help others.”

I walked away realizing my first impression of Tayvho was way off. What I thought was a cry for attention is actually honest self-expression.

Maybe this kid is on to something. Because he never stopped smiling and laughing the whole 40 minutes we were talking. It was authentic. And contagious. Maybe we should all “dance like nobody’s watching” like the popular saying goes. And maybe if we would, our world would be a little happier.