Jackie Smith first heard this quote by Timothy Keller at church two days after she received the heartbreaking diagnosis of premature ovarian failure at age 29. Now the quote graces her Etsy site where she sells jewelry to raise money for the IVF (In Vitro Fertilization) procedure she and her husband, Zach, hope will allow them to conceive. Of course it will take more than money, but they faithfully pray that the forces of nature will combine with medical advancements and a selfless act to make their baby dream come true.

Zach and Jackie Smith’s love story sounds like something from a Nicholas Sparks novel. The two had known each other as kids but lost touch. After Jackie became Facebook friends with Zach’s mother in 2010, she reached out to Zach and his brother, too. Zach was the first to respond, and during their first dinner date, they hit it off immediately. In 2013, Zach proposed to Jackie in New York City on the 4th of July (her favorite holiday) and presented her with his great grandmother’s ring. A year later, they married at the Owensboro Convention Center surrounded by family and friends.

The following winter Jackie and Zach decided to start a family and stopped using birth control. Then the waiting game began. After four months without a menstrual cycle, Jackie called her doctor and went in for blood work and an ultrasound. Her ovaries were so small they were difficult to find, and her hormone levels indicated a problem. The numbers showed that she had already gone through menopause, despite the fact that she was not yet thirty years old. A fertility clinic in Nashville confirmed their fears and gave Jackie a mere 5% chance of ever ovulating in her lifetime.

The day Jackie received that phone call was the hardest day of her life as she “grieved over something that never would be.” But this woman of high spirit and fierce determination won’t give up on becoming a mother. The Smiths started searching for an egg donor so Jackie could experience pregnancy and Zach could “pass on his good looks,” she explained, giving her husband a playful nudge. And though both of them laugh lightheartedly about Jackie’s compulsion to find just the right person, it’s not something they take lightly.

First, they asked Jackie’s cousin in California. She agreed, but due to age her egg development would not have been ideal for the transplant. Next Jackie took to the web, scouring countless donor
agencies and clinics for someone who had similar traits, beliefs, and personality as herself with a clean medical history. The possibilities seemed endless, yet none were quite right. It was “worse than picking out bathroom towels,” the couple joked.

Exasperated, Jackie took a break and logged onto Facebook. When she came across one of her sorority sisters, a smart, athletic young woman in her early twenties, Jackie wondered aloud to Zach why she hadn’t found this woman on a donor site. Then Jackie wrote “the strangest message of [her] life,” asking the friend if she had ever considered being an egg donor. And serendipitously, the sorority sister replied that she was actually in the process of filing her paperwork to become one.

Facebook messages became phone calls as the talk of egg donation became more serious. Jackie’s sorority sister, who wishes to remain anonymous, agreed not to file her paperwork and focus solely on donating eggs for the Smiths. “Jackie and Zach are the kind of people meant to be parents. To me, giving them the gift of egg donation means that I’m helping fulfill their dreams. And sharing a part of me, that they literally could not get themselves, is the selfless and Christian thing to do,” she said.

But their arrangement will take more than a signature on a contract. Jackie has already begun hormone therapy to prepare her body to accept the transferred eggs. Much travel to and from the fertility clinics will be involved for Zach and Jackie and their egg donor. They will incur numerous fees for lab work in addition to the estimated $20,000 cost of the actual IVF (In Vitro Fertilization) procedure. And, because infertility treatments are seen as optional, none of these expenses will be covered by insurance. But Zach and Jackie have faith that the time, anxiety, and cost will all pay out the biggest reward in the end — a baby of their own.

The Smiths both have additional jobs in order to offset the expenses. Besides his career in construction, Zach coaches football at South Spencer Middle School and does landscaping work on the side. Jackie is the business development manager at the downtown campus of Owensboro Community and Technical College, and six years ago she started her own jewelry-making business, Jackie Blue Handmade. Her beautiful creations of gemstones, beads, metals, and various other materials can be found in local boutiques such as Shelley and Friends, Bella Ragazza, and Embellish. You can see examples of her work and request custom orders on Facebook, Instagram, and Etsy. Just look for #beadsforbaby. 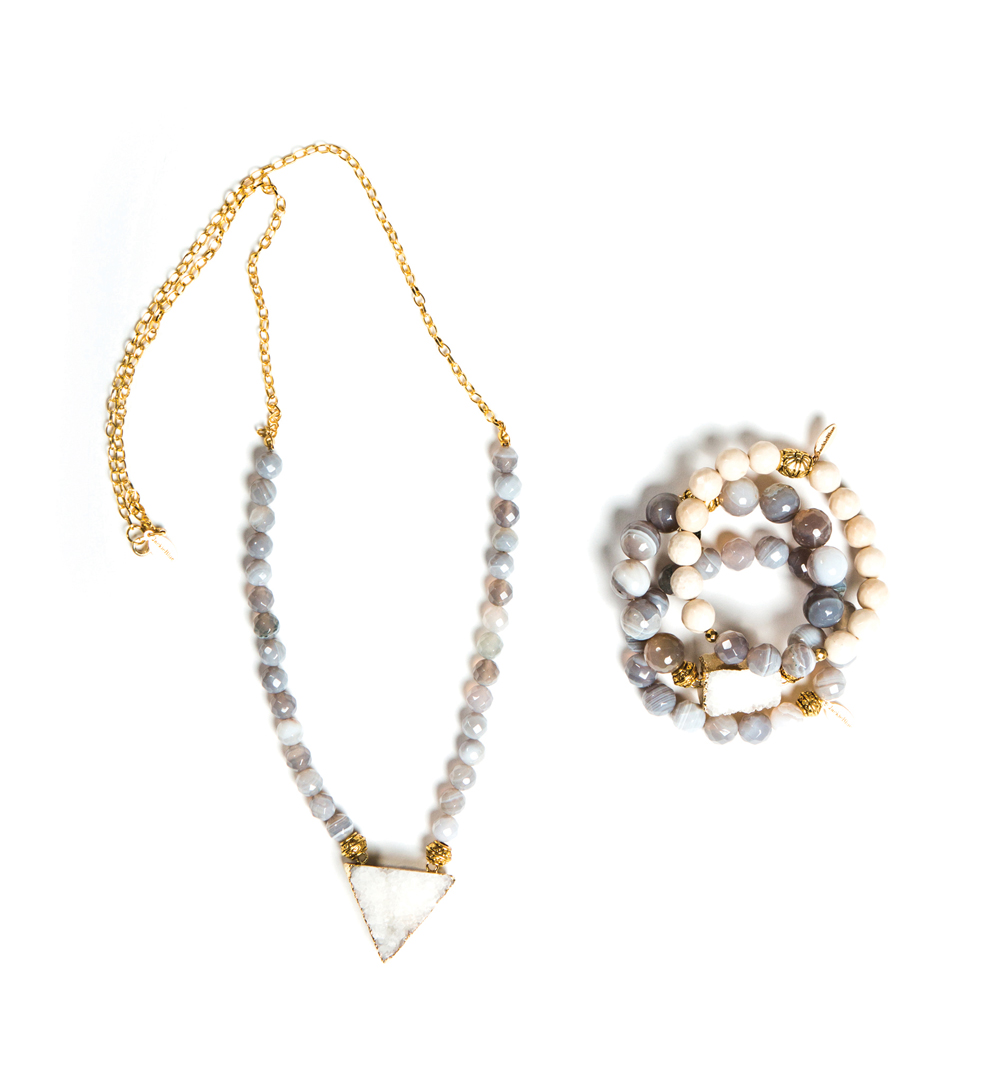 Jackie says jewelry making started as a hobby, but the costs of IVF motivated her to make it into something more. She credits her mother, Shelley Schmitt, not only for exposing her to costume jewelry as the owner of Shelley and Friends Salon and Boutique, but for leading by example. Jackie claims she gets her “I’m-going-to-make-it-happen” from her mom. Creating the necklaces and bracelets also keeps her mind busy since infertility can be so “emotional and overwhelming,” Jackie shared.

The couple has also been blessed by the financial and emotional support of family, friends, and their church. Last fall, 40 families donated items for a two-day garage sale. Zach and Jackie agree that the best thing people can do is to just ask how things are going every once in a while. Jackie emphasizes that they don’t need a quick fix, just an “I’m here for you.” And, of course, all prayers are appreciated because Zach and Jackie know that their love for each other and their “faith will get [them] through this 100%.”

This article was originally published in the May/June issue of Owensboro Parent Magazine.