Greg Strahan has been named president & CEO of Owensboro Health, effective immediately. An offer was extended following Monday’s meeting of the Owensboro Health board of directors.

Strahan had been Owensboro Health’s interim CEO since April 13. Previously, he served as chief operating officer (2007-2016) and vice president of business development (2005-2007) at Owensboro Health.

“The entire board is confident that Greg Strahan is the right person to lead Owensboro Health forward,” said Deborah Nunley, chair of the Owensboro Health board of directors. “He has been part of some of the biggest achievements in our history, and he has a deep understanding of our mission, culture, and values.”

As chief operating officer, Strahan helped steer construction of the 477-bed Owensboro Health Regional Hospital, which opened in 2013. He also led the implementation of the Epic electronic medical record, a $57-million project, and helped guide the hospital to several national rankings in quality and patient safety. Under Strahan’s direction, Owensboro Health’s medical group, now known as One Health, grew from 19 providers to over 100.

He and his wife Susie have four children and four grandchildren.

“Greg’s familiarity with our system is a tremendous asset,” Nunley said. “He truly understands the needs of our region and will be able to hit the ground running.”

As the system’s top executive, Strahan says his priorities will continue to be quality, value, and access to care.

“We have a tremendous team in place at Owensboro Health, and they are committed to providing high-quality care,” Strahan said. “I believe we are writing a new chapter in the health of our region.” 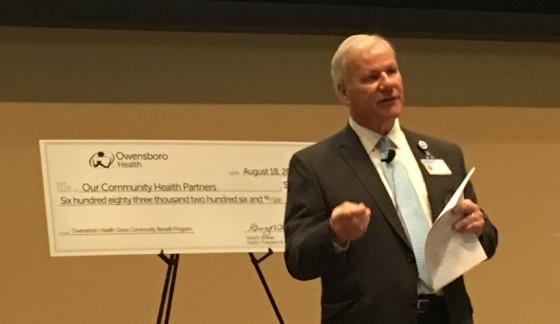