Elf on a Shelf Returns to Estes

For the last three years, Estes Elementary School has had a special guest greet students in the morning around the holidays. On Monday, Dec. 12 from 7:25 a.m. to 8:05 a.m., the “Estes Elf On A Shelf” arrived in the school frozen on a motorcycle in the gym. The elf is played by Estes curriculum facilitator Ryan Williams. But please, don’t tell the students that! Williams says the mystery of the elf is one he holds close to his heart.

“That’s part of the magic of the holiday season. I’m sure some of the students recognize me through the costume, but I refuse to acknowledge I’m the elf. I want the kids to use their creativity and their imagination to guess who the elf really is,” said Ryan Williams, Estes curriculum facilitator. 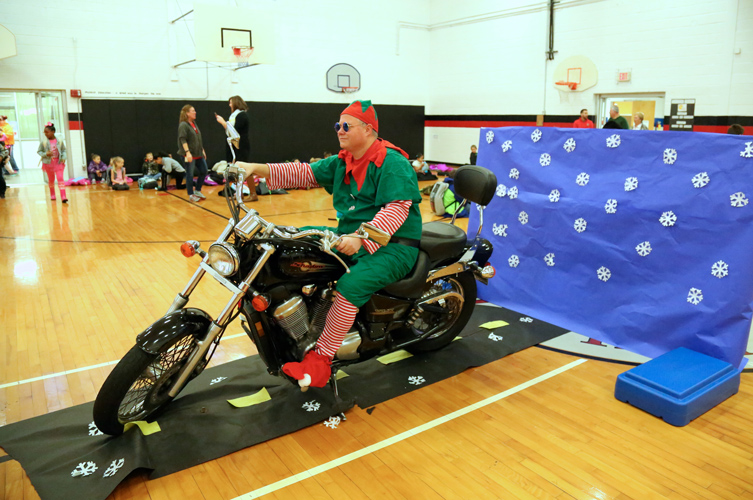 The elf has appeared in several locations throughout the school over the years. From being suspended from a basketball goal on an ornament in the gym, to scrunching up in a shelf. This mystic elf is willing to get a little uncomfortable to put a smile on a student’s face.

“One of our goals at Estes is to get our students excited about coming to school. While it might be a little unorthodox to have one of our employees dressed in tights motionless in different parts of our school, I’m all for it. The students love arriving at school and guessing where the elf will appear next,” said Shari Flagg, Estes principal.

Being frozen in place and having students try to talk to you can be a little challenging. Last year, the elf’s hands cramped up after holding a position for an hour.

“Sometimes the elf has to have some helpers to get him back to normal. But, I’d rather be a little sore than ruin the magic by letting the students see me transform back into Mr. Williams,” added Williams.

Owensboro Couple Gets a Very Merry Surprise from Meijer

Get in the Christmas Spirit

Elf on a Shelf Returns to Estes