Owensboro Health and OMFA Invite All to Participate in Community Painting

The community painting event will take place from 11 a.m. to 2 p.m. on Monday, April 17, 2017, in the lobby of Owensboro Health Regional Hospital. Community members of all ages are welcome to come and contribute to the painting, said Debbie Zuerner Johnson, director of Community Engagement at Owensboro Health.

“We wanted to bring this event within the walls of the hospital,” Zuerner Johnson said.

According to Owensboro Museum of Fine Art Director Mary Bryan Hood, the partnership is a part of the museum’s ongoing community engagement model to offer free educational services in the visual arts to the community, state, and region. The initial painting event resulted in the production of a color note card depicting the docking of a steam wheeler on the Ohio River at the foot of Frederica Street.

“The community painting project is a continuation of the successful model developed by the museum’s education staff and conducted at various events and venues, including the opening of Riverfront Crossing in downtown Owensboro and at farmers’ market events sponsored by Owensboro Health,” Hood said. 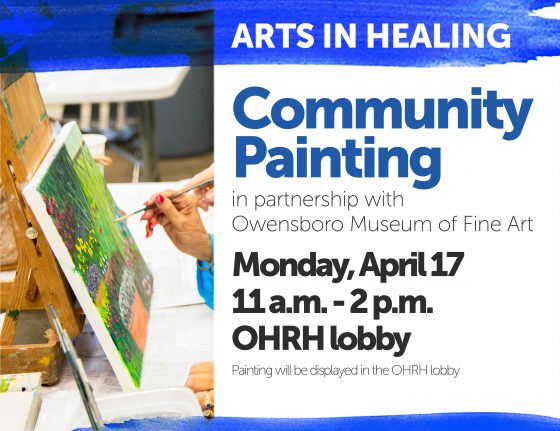 Owensboro Health and OMFA Invite All to Participate in Community Painting