The International Bluegrass Music Museum announced the lineup for their Fall 2017 Benefit Concert series. The Museum will host six shows at their current location in downtown Owensboro beginning September 21 and running through December 1.

Kicking off the series on September 21 is the Kenny and Amanda Smith Band. Boasting two nominations for this year’s International Bluegrass Music Association awards (Kenny: Guitar Player of the Year & Amanda: Female Vocalist of the Year), their instrumental talent is paired with strong vocals and thoughtfully written lyrics. 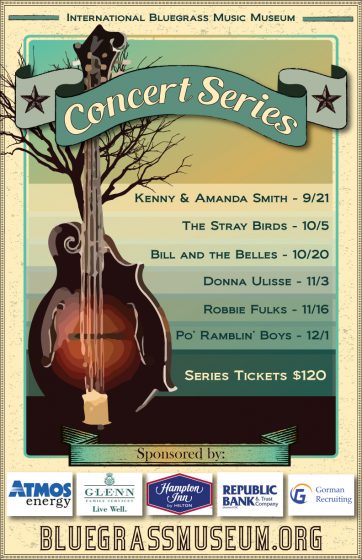 Two of the more progressive groups on the lineup will play the month of October: Nashville-based trio, The Stray Birds on October 5, and the high-spirited, old-time group, Bill and the Belles, on October 20.

Award-winning singer-songwriter, Donna Ulisse will play November 3, and the phenomenal guitarist and songwriter, Robbie Fulks is scheduled for November 16.

Rounding out the series on December 1 is the high-energy, traditional bluegrass sounds of The Po’ Ramblin’ Boys.

Series tickets are available for $120 each; passes include one ticket to each show in the series. Individual show tickets will be available for purchase if series tickets do not sell out. With a capacity of 120, these shows create an intimate atmosphere allowing audience members and artists to connect through the music.

All shows will begin at 7:00 pm with doors opening at 6:30 pm. Light food and a cash bar will be available.

Based on the Museum’s transition to the new building next spring, this could be the last concert series at the current location.

For more information on artists, the museum or to purchase tickets, visit bluegrassmuseum.org or call 270-926-7891.