BAM Opens Season with She Loves Me

She Loves Me is the first of four musicals for Back Alley Musicals’ 2016-17 season, which opens Nov. 10.

Constantly at odds with each other while on the job, sparring co-workers Georg (Justin Miller) and Amalia (Alisa Hamilton) are unaware that each is the other’s secret pen pal they met through lonely-hearts ads. Through their letters, they have been falling for each other. But, will love continue to blossom once their identities are revealed? Adding to the intrigue are Steven Kodaly (Calvin Malone) and Ilona Ritter (Loré Renner North) and other fellow employees of Maraczek’s Parfumerie in Budapest in the 1930s. The show was first staged on Broadway in 1963. 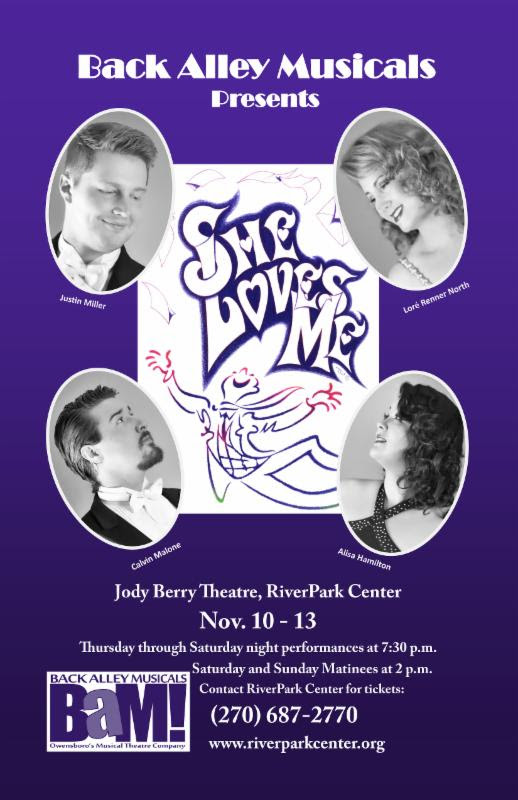 engagements with regional theatre groups. Alisa Hamilton and Loré Renner North have many BAM roles to their credit as well.

The musical is set for Nov. 10-13 in the Jody Berry Theatre, RiverPark Center, Owensboro, KY. Evening performances on Thursday through Saturday nights will be at 7:30 p.m. Saturday and Sunday matinees will be at 2 p.m.

The delightful cast of She Loves Me includes:

Individual tickets are $25 for adults and $15 for students plus $3.75 RPC handling charges per ticket.

For tickets, contact the RiverPark Center Box Office at (270) 687-2770 or online at riverparkcenter.org.

Or, purchase season tickets for all four 2016-17 season shows for $90 by calling the BAM Business Office at: (270) 925-4963. BAM will take your season order and provide it to the RiverPark Center Box Office.

One on One Art Exhibit

Not Our Panther Creek Park